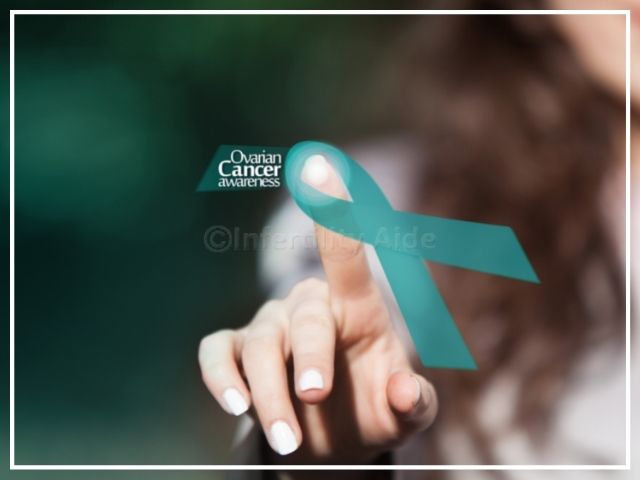 Around 1.2% of all women will be detected with ovarian cancer during their lifetime and more than half of them lose their lives because of it. Cancer spreads silently and ovarian cancer usually remains undetected in the early stages. However, if you catch any of the early signs and symptoms of ovarian cancer, you may get it treated while the disease is still confined and have much better chances of full recovery.

Egg freezing is a popular method for fertility preservation in cancer patients but usually in patients of ovarian cancer it in not possible. However, a US study found that it may be able to preserve the uterus and the healthy part of atleast one ovary in young women with early-stage ovarian cancer. So, early detection is the key here.

Ovaries are the almond-sized organs that produce and store the eggs (ova) and the female reproductive hormones progesterone and estrogen.

What is ovarian cancer?

Ovarian cancer happens when cells of the ovary start to multiply without control. This disease may originate either in the ovaries, fallopian tubes, or the peritoneum.

There are some warning signs of ovarian cancer, but in the early stages the symptoms are quite vague and overlapping with other diseases, so they are often dismissed.

According to the American Cancer Society, only 20 percent of ovarian cancers are detected during the early stages, when they are still within the ovary and are likely to be treated successfully.

Normally, the diagnosis of ovarian cancer is made in later stages after it has spread within the pelvis and abdomen. Obviously, in advanced stages the cancer is rather difficult to treat.

In more than 70% of patients of ovarian cancer, the disease is diagnosed only at a very advanced stage when the prognosis is poor.

So, if you catch any of the early signs and symptoms of ovarian cancer, it is best to have it checked instead just dismissing it as nausea, ageing, or digestive problems.

What are the symptoms of ovarian cancer?

The symptoms of ovarian cancer are usually noted once the cancer has spread beyond the ovaries. In some cases, cells of the ovarian cancer are found only after the lymph nodes outside the abdomen, liver, spleen, lungs, intestines or the brain, have been affected.

Sometimes, in the early stages of ovarian cancer there are no symptoms at all. The symptoms appear as the condition progresses and cancer growths start to put pressure on your intestines, uterus, bladder, etc.

The symptoms of ovarian cancer that may develop at any stage include:

These symptoms are quite generic and may be caused by various other conditions, but in that case, they should respond to medication or go away on their own.

However, if you suddenly notice these symptoms and they refuse to go away with basic treatment, you might want to get some more investigations and see if there’s any indication of ovarian cancer.

Signs of ovarian cancer that you may be able to notice early in the development of the disease include:

Abdominal bloating is experienced by every woman at some stage in her life due to hormonal changes but if the condition persists every day over a period of three weeks, you need to take it seriously.

Feeling bloated for weeks is one of the most common early signs of ovarian cancer, so don’t ignore it.

Similarly, constipation may be caused by something as small as a poor diet, lack of activity, etc. but if it is not resolved after many corrective actions and medical intervention, it is a red flag.

Pain in the abdominal, pelvic or lower back region is again a vague but important symptom. If you notice some new development of pain that cannot be attributed to other causes and is not alleviated by making diet or other changes, you should consider seeking the opinion of a qualified medical professional.

Feeling full quickly even after eating small meals and a general lack of appetite may be an indication of ovarian cancer. It could be due to many other reasons, but if none of those apply in your situation, you need to get more investigations done.

Sudden inability to hold the bladder or pain during urination is often attributed to urinary tract infections but if you don’t suspect that and these symptoms last more than a few days, you should get your gynecologist’s opinion.

Having to urinate frequently and urgently, as well as the feeling of pain and pressure during urination may indicate the possibility of ovarian cancer.

Since the early signs and symptoms of ovarian cancer are similar to those of ageing, weight gain, hormonal changes, etc., they are commonly ignored. This is the biggest challenge in the early diagnosis of ovarian cancer, when it may be completely cured.

So, you must see your doctor for an evaluation if you notice the sudden development of any of these symptoms, in the absence of other obvious causative factors, especially if the symptoms persist for more than a few weeks.

If you find any of these early signs and symptoms of ovarian cancer, which have sudden development and do not go away within a few weeks, you must seek the opinion of a qualified professional. To consult with some of the renowned gynecology experts, click here.

What are the signs and symptoms of ovarian cancer? National Ovarian Cancer Coalition. http://ovarian.org/about-ovarian-cancer/what-are-the-signs-a-symptoms