How does PGS improve IVF results?

A genetic test, known as pre-implantation genetic screening (PGS), is widely being used to improve the success rates of IVF. Most IVF failures are often linked to poor quality of the embryo and fertility clinics recommend PGS to such patients. So how does PGS improve IVF results?

PGS screens embryos for abnormal chromosome number (aneuploidy). This is a major cause of both implantation failure and miscarriage. Therefore, it allows doctors to transfer only the healthy embryos into the uterus, thus improving the chances of IVF success.

There is always a chance for the occurrence of chromosomally abnormal embryos. In fact according to this study published in Biomed Central, nearly 50% of all IVF embryos are actually aneuploid. 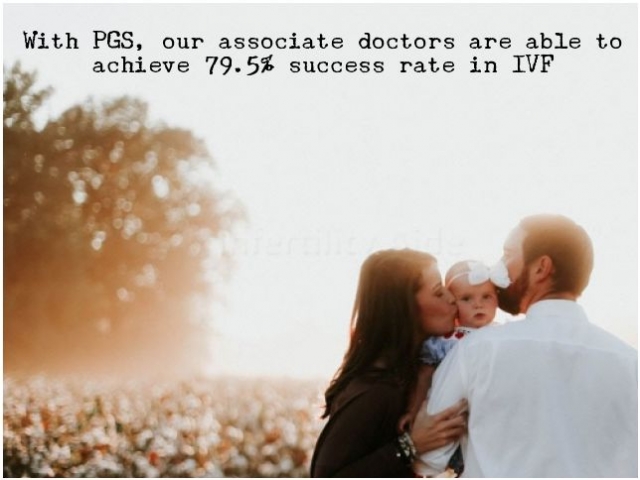 Who will benefit from PGS?

Recurrent miscarriages and failed IVF attempts can be the result of aneuploid embryos. The incidence of chromosomal abnormalities and consequent fertility problems increase with advancing maternal age, and various studies have shown that the use of PGS can increase the chances of a successful pregnancy, in cases such as these.

PGS can increase the rate of clinical pregnancy

The chart below, based on information published in Reproductive Biomedicine Online, in 2016, shows:

Taking into account the effects of increasing age on fertility, these results are not surprising. They suggest that women over the age of 35 are more likely to benefit from PGS and that there may be very little benefit in the use of PGS to improve IVF success rates in women under 35. 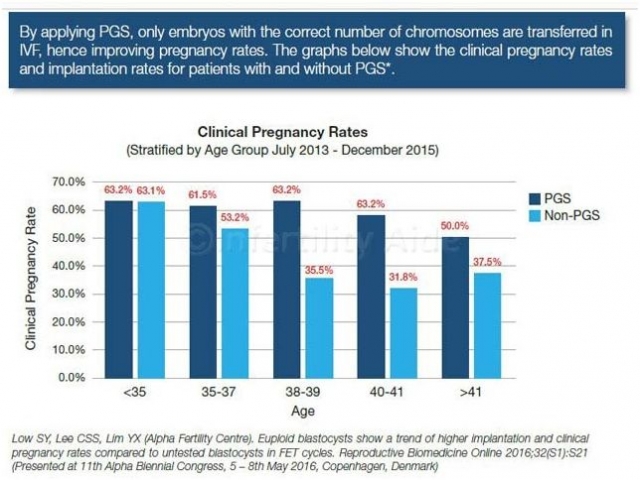 To add weight to this data, another study published in Fertility and Sterility, in 2013 found that:

If a chromosomally normal embryo is transferred into an older woman, the chances of successful implantation and pregnancy are not significantly different to that of a younger woman.

Additional studies and data from fertility clinics also support these findings. As an example, the Biomed Central study mentioned above states that: comparing the ongoing pregnancy rates between embryos selected through PGS or just on morphology alone, showed these to be 69.1% vs. 41.7% respectively.

Embryos which look healthy on examination under the microscope can still potentially have problems that may affect successful implantation and pregnancy.

What are the other benefits of PGS?

As well as improving the rates of successful clinical pregnancies from IVF, PGS also has several other benefits including:

Given that only about 70% of PGS embryos lead to a healthy pregnancy, there must be limitations to the procedure. These include:

PGS is usually recommended by fertility doctors to the patient groups described above. PGS is able to identify abnormalities in chromosome number.

These abnormalities can often lead to failed attempts to establish and maintain a successful pregnancy. Therefore, through choosing embryos lacking these abnormalities, the success rates of IVF treatment may be improved.

Studies and clinical data show an increase in pregnancy rates when PGS is combined with IVF. As shown in the data presented above, from Reproductive Biomedicine Online, this increase can be as much as ~ 30%.

As well as increasing the chances of a pregnancy occurring, PGS alongside IVF also decreases the chances of miscarriage and raises significantly your possibility of delivering a healthy baby.

Do you have any comments about PGS testing with IVF? Please share them below: