What is Invitro Maturation (IVM)? Is it better than IVF? 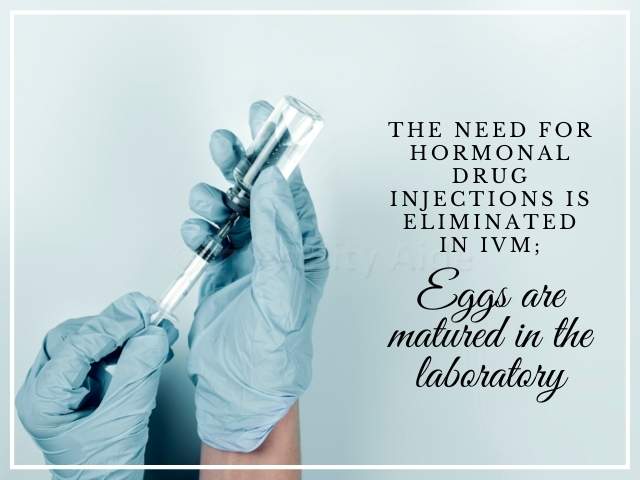 Have you heard about Invitro maturation or IVM? It is a pioneering new technology that allows women with PCOS to undergo IVF treatment without risking their health.

The process of IVF involves administration of hormonal injections to women for ovarian stimulation, which puts them at risk of Ovarian Hyperstimulation Syndrome (OHSS), especially if they have a history of PCOS.

IVM involves collection of immature eggs from the ovaries and then maturing them in the laboratory. The matured eggs are then combined with sperm and the resultant embryos are transferred back to the female uterus.

In a standard IVF procedure large amounts of gonadotropin hormones are administered to the patient to stimulate the ovarian follicles and induce maturation of multiple eggs.

This induction of hormonal injections is an expensive process and may even cause adverse side effects sometimes.

The process of IVM has been available since the 1990s but it hasn’t been extensively used because the results are much better in IVF as the eggs matured inside the female’s body are considered to be healthier.

Initially for IVM immature eggs were collected from the follicles and matured in the lab using hormonal drugs.

The new IVM procedure is similar to the old except in one respect—the eggs are matured in the lab using a protein dimer called cumuli (a growth factor) in place of the hormones.

The new method allows for 50% more healthy mature eggs as compared to the old one and that resolves the concern of egg quality which was initially causing IVM to produce poorer results than IVF.

However, not everyone is a candidate for IVM and this treatment in not widely offered still. Only 3,000 babies have been born worldwide with IVM.

Here are the steps in IVM procedure:

Some blood tests will be performed and a 2D/3D scan will give the doctor an idea about the number of ovarian follicles, and he will be able to decide on the best time to extract the eggs.

After little or no stimulation, the immature eggs are retrieved with an ultrasound guided needle, similar to the IVF process. The needle is inserted through the top of the vagina and this process is performed under anesthesia to reduce patient discomfort.

The immature eggs are then stimulated with hormones (old procedure) or cumulin protein and c-AMP (new procedure) to bring about the maturation, which normally requires 1-2 days.

Usually ICSI is used to fertilize the mature eggs with sperm, and the resultant embryos are grown under controlled conditions of a laboratory for 3-5 days.

The embryos are then transferred back to the uterus of the patient and pregnancy confirmation comes after two weeks.

Is IVM better than IVF?

Invitro maturation clearly has some benefits over the standard IVF procedure:

If it is cheaper and safer than IVF, then why is IVM not used in routine? This is because:

Who is it for?

IVM is indicated in:

However, very few clinics offer IVM and the decisions to choose this procedure over IVF is only made after thorough evaluation of the case.

How much does IVM cost?

The average cost of IVM is normally between $3,000 and $5,500, which is almost half of what an IVF cycle costs. Fewer tests and little to no hormonal injections help significantly cut the treatment costs.

Risks and side effects

Most ART procedures are quite safe and in IVF the main risk is about an adverse reaction to the stimulation drugs. Since the drugs are not used, this risk is not present in IVM.

There is also a risk of multiple pregnancies, if more than one embryo is transferred. Besides, as in any medical procedure, there is also a small risk of infection if you are not careful.

Where can I get IVM?

Very few clinics offer IVM right now because there are not many takers. More research in this direction will hopefully see increased success rate of IVM in due time and make this a more viable option for women.

Doctors are also considering the use of hormone tablets that could improve the endometrial lining and make it more receptive for the embryos.

How long has this been around?

This science has been around for roughly 20 years and it was ten years ago that a woman first conceived with IVM.

Tina Milkovic, a patient of PCOS, was considering IVF when she was unable to conceive. But just as she was to start with the treatment, her clinic got licensed for IVM and she decided to give it a try. Luckily for her, the first cycle of IVM was successful and she had with her daughter, Isabella, and son, Ilia, who are ten-year-olds, as reported by the Telegraph.

As scientists find ways of improving IVM success rates, the demand for this procedure will increase. Regular improvements in IVF are also making it safer for women, but even if adverse reaction to hormones is not a concern, IVM—being no hormone treatment—is significantly cheaper.

If doctors are able to match IVM’s success rates with those of IVF, the financial benefit in the former will definitely make it the preferred treatment.

However, right now, IVM is scarcely offered and there is not enough data to draw conclusions from. More research is needed to see if this procedure can actually be offered in routine.

For more information about IVM and if it is suitable for you, please get in touch via the form on this page.