Greg Jenner’s infertility struggle & the arrival of his ‘miracle baby’ 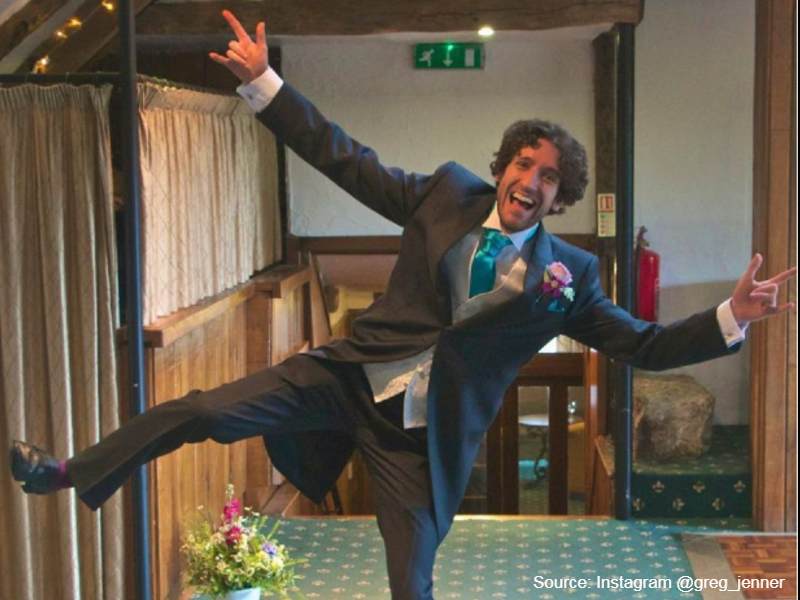 British Historian Greg Jenner’s infertility struggle was something he describes as “five years of pain” but it has all ended with the arrival of his ‘miracle’ baby daughter, who was born on August 22, 2019 with the help of IVF.

The public historian, who has acts as an advisor on CBBC’s Horrible Histories, shared the story of his and his wife’s fertility struggles on Twitter, so people suffering in private can find something to relate to.

Pouring the details of infertility for his 76,500 Twitter followers, Greg revealed that the painful journey included two miscarriages, an ectopic pregnancy, waiting for IVF, and then three failed cycles over the years.

“Hi! OK, BIG PERSONAL NEWS… You may have noticed I’ve had a lot of down days on here.,” he wrote on his Twitter timeline.

“Then in early 2017, an ectopic miscarriage. I can’t tell you how devastating it was to feel hope then despair on a loop. The next step was IV F. NHS criteria at the time, in Surrey, required we wait 3 years, all the while our natural fertility decreased. It’s a catch 22.

While Greg and his wife were able to get funding for their first two rounds of IVF, both cycles failed and they were left dejected.

IVF is not only financially difficult, but it is also quite harsh physically, especially for the woman.

“We had a very kind doctor who got us in as soon as was allowed. We were funded for two rounds of IVF on the NHS. But both rounds failed, he said. “It was doubly heartbreaking because IVF is utterly brutal and watching my wife suffer for no end result was truly horrible.”

The two of them were almost on the verge of considering adoption, when they decided to take another chance on private IVF that obviously did not come cheap.

“We started to look into adoption, and decided it would be our next step if more IVF failed, but chose to gamble our life savings on private IVF. We set a budget – we would stop when it ran out,” wrote Greg. “Biggest decision of our lives.”

People undergoing IVF often find that the uncertainty of success in IVF combined with the pressure of all those medical expenses, causes a lot of stress. For Greg, it was also the lowest-point of his professional earnings.

It also affected their work, because they were feeling sad and a little hopeless inside.

“Just FYI, this coincided with the lowest-earning year in my 15-year career. I was trying to write a book full time, but it’s so hard to be creative & funny when you’re really sad & stressed about money. It was a battle for both of us to carry on working when we felt so hopeless,” he said.

Many people don’t know that there are some ways to lower the cost of IVF and you may find highly affordable IVF services if you are willing to look a little farther from home.

The historian and his wife underwent “4 private rounds of IVF in 2018. The doctors kept tinkering with the medicine. Eventually, the last one worked. We were pregnant!”

Many people need multiple cycles of IVF, because the success rates for IVF in UK are under 30%, according to the NHS.

When something good happens after a long struggle, it is natural to become insecure and feel fearful of losing it. Greg Jenner’s infertility also made him fearful throughout the pregnancy.

They were so scared to get the scans as they always feared another bad news. “Immediately we began fearing another loss; 4 years of grief conditions you to constantly expect bad news. Every growth scan was terrifying.”

What made it harder was the sickness and difficulties they had endure during the pregnancy. “This was a viable pregnancy. But there was still a sting in the tail. My long-suffering wife got landed with nature’s least-funny joke: hyperemesis (pregnancy sickness from hell),” he wrote.

“She endured nearly 20 weeks of vomiting 8-12 times per day. She lost so much weight, and was hospitalised twice for dangerous dehydration. It was not fun. She was still working full-time. She felt like death warmed up. But the pregnancy stuck.”

As the due date of the baby’s arrival approached, things were finally looking up in the Jenner household.

“Buoyed by fresh hope, and suddenly aware I had a baby-shaped deadline, I found renewed energy, and stayed up to 4am for 6 weeks in a row to finish my book 10 days before the baby’s due date. It had taken 4 years to research & write, and I feared I’d never finish it,” Greg wrote in his tweets.

My birthday began at midnight, but my daughter did not get the memo. 6 hours of constant screaming and shitting, and she’s now asleep on me. The glamour of fatherhood (I love it so much)

“And on Thursday night, thanks to my wife’s incredible courage — and the kind support of friends, family & medical staff — and, after 15 years together, and 5 years of pain, we finally held our baby. She’s called Esmé, she has a ridiculous amount of hair, and she’s amazing.”

Sharing about infertility because he should

“I’m sharing this story because infertility is an agony often felt in private. People rarely knew how to talk to us. It sometimes made me angry there wasn’t more awareness. But I get why that is because I kept it hidden. I was scared. And I still don’t want to talk about it now…” he said, echoing the sentiment of millions of infertile people around the world.

“So, forgive me if I don’t respond to your tweets. I’m not strong enough; I don’t want to relive it all, and I don’t want to be some IVF spokesperson, or a news story, and I’m not qualified to give infertility advice. I’m sharing this because I feel I should, not because I want to.”

Overwhelmed by the support

Greg Jenner’s infertility story was made public by the historian but he made it clear that he is not willing to answer questions and just signed off to be with his family.

“I do want to say I’m grateful to so many of you for the twitter conversations that were a welcome distraction. You often helped without realising it. Thank you. Twitter is a kind place, as well as a hellhole full of Nazis. But I’m now off to hug my wife & baby. Goodnight x.”

When he returned in the morning, Greg had a torrent of congratulatory messages waiting for him on Twitter.

“Oh my god, I wasn’t prepared for your replies. I’m bawling my eyes out in the lounge. Thank you, Twitter. Thank you from the bottom of my heart xx,” he wrote back, acknowledging all the kind messages from his followers.

“I’ve woken up this morning to an astonishing torrent of kindness and love. I can’t believe our beautiful daughter is trending on Twitter! I’m so sorry I can’t reply to your messages; I’ve read every single one and they mean the world to my wife and me. Thank you so much xx.”

Thank you, Greg Jenner, for realizing you should talk about infertility and sharing your struggle with us, even though you didn’t want to.