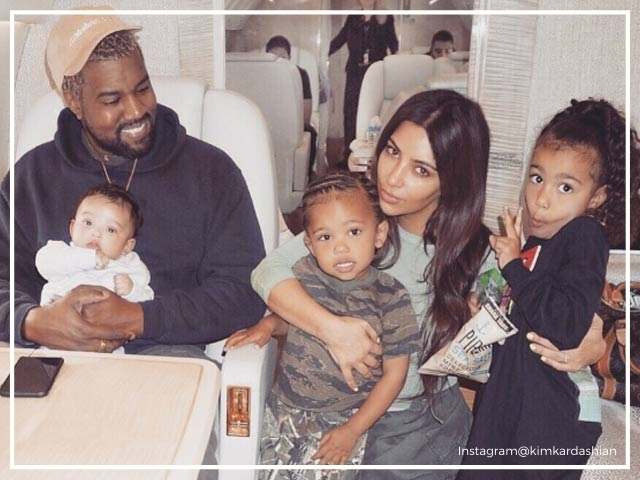 “When you don’t want to be pregnant, it happens. When you want it…” said Kim Kardashian, who tried hard with her husband, Kanye West, to expand their family, but could not. Eventually, they signed up for medical assistance but Kim Kardashian’s IVF journey was not without its problems.

While the reality TV star was able to conceive their first baby naturally even without trying, she underwent IVF followed by a difficult pregnancy during her second time.

Given the complications in their earlier pregnancies, for the third time, the couple had to hire a surrogate to carry their baby.

“A few years ago I was told I could never get pregnant,” Kardashian had told Elle UK. “Three different doctors told me the same thing, which is why I wanted to have my eggs frozen.”

She was just about to see a doctor and start the process of egg freezing, when she found that she was already pregnant with her little girl, North.

“I want a boy and another girl; I want it to start happening straightaway,” she was very clear. “I loved being part of a huge family – and I want that for North. We’d do IVF if nothing happens, but we both want to keep trying naturally.”

Initially they tried everything to conceive naturally, with the TV star even joking to US Magazine that she and Kanye West had sex “500 times a day.”

“It’s getting exhausting. [Kanye] always says: trying for baby number two isn’t as fun as trying to baby number one,” she added.

Kardashian discussed about the complications she faced before the birth of her eldest daughter. She went to into premature labor and her doctors were worried that she was suffering from life-threatening preeclampsia.

“I did go through a lot with the delivery and so we faced a couple challenges,” she said. “But we’re literally trying everything that we can to make it happen, so I’m to the point now where it’s not as stressful to me. And maybe that’s when they say it happens.”

The TV star also said that they’ve been trying to get pregnant unsuccessfully for almost a year and that if nothing works, they’d consider hiring a surrogate.

“We are trying. We try every single day,” she was reported as saying. “You can’t try harder than we try.”

The couple also said that they felt better about surrogacy than adoption.

Eventually, the couple turned to IVF and it was “causing problems with her body.”

Reportedly, she also underwent three surgeries to repair her uterus as the inner lining was damaged and conception without medical assistance might not have been possible. They tried but could not conceive with the normal IVF process, involving stimulation injections. Unfortunately, it did not happen.

The next time they tried natural IVF, and Kardashian, 37, and West, 43, were told they’re successful. She wanted North to have “a sibling close in age…just like she is with her sisters.”

As happy as she was, Kardashian had it even more difficult with her second pregnancy.  “I have the worst morning sickness, day sickness, night sickness,” she reportedly said.

The couple was prepared for a high risk delivery. A source close to the couple said, “It’s been a long road, and they are just so thankful to the doctors because they said she would never conceive again.”

They also knew this would be the last pregnancy for Kardashian because of all the complications she faced earlier.

Despite all the problems, Kardashian was extremely thankful to be pregnant again. “I’m so grateful to even be pregnant when we didn’t think it would ever happen for us,” she said. “It is so worth it!”

Back in September 2017, it was reported that Kim and Kanye were expecting a third child. However, this time there was no bump on her belly; they had hired a surrogate.

The couple was extremely involved in the process, even providing a diet and eating regimen to the surrogate.

She talked about openly on the Kardashian TV show saying, “Kanye and I have always talked about having more kids, but after what I went through in Paris, the urgency is even greater. I can’t carry any more kids… It’s the worst. It’s not going to be happy for me. I had a full break down.”

The couple remained tight-lipped about their surrogate for a long time. Maybe they didn’t want the surrogate hounded by the press, like it happened with Sarah Jessica Parker.

But they did confirm the news in September, in Season 14 of “Keeping Up with the Kardashians.”

Interestingly, there was also talk of her sister, Kourtney, being the surrogate at one point, but Kim was against the idea.

Finally the third baby arrived. Kardashian and West were delighted to welcome a little baby girl in January 2018, when North was 4 and their son, Saint, was 2.

“She’s here! We’re so in love,” Kardashian, then 37, wrote on her website. “Kanye and I are happy to announce the arrival of our healthy, beautiful baby girl.”

“We are incredibly grateful to our surrogate who made our dreams come true with the greatest gift one could give and to our wonderful doctors and nurses for their special care.”

Kim revealed her surrogate had watched her hit show but wasn’t a super fan of hers and had seen her struggle. The TV star felt comfortable with her and even claimed she loves the surrogate, but she did not invite her to the glamorous baby shower she had in November that year.

“I did not invite her,” she said. “Of course, I would’ve wanted her to be there and be a part of it.

“But I hadn’t really gone that far in explaining it to my kids yet.”

It was really her decision but Kardashian did make a little more surprising disclosure a month after her baby was born.

In a February episode of Keeping Up With the Kardashians, Kim talked about regretting her surrogacy decision while chatting with her sister Khloé.

“Even though I will appreciate not having to gain the weight and then lose the weight … I so would have rather have done it on my own.” She said, “I just hope I care as much. … Everyone says it’s like no different.”

Earlier in 2019, People magazine confirmed that the couple is planning to welcome their 4th child soon, and now he’s here.

He arrived on May 10, 2019 and the news was confirmed by the Reality TV star via Twitter. “He’s here and he’s perfect!” she tweeted.

The couple has known for a while that it’ll be a boy.  Kardashian revealed that she had been looking up Armenian boys’ names to honor her family’s heritage but hadn’t really found anything.

“It’s a boy, I think it’s been out there,” Kardashian told Andy Cohen in the Jan 14 episode of Watch What Happens Live. “I got drunk at our Christmas Eve party and told some people. I can’t remember who I told because I never get drunk.”

Kim Kardashian’s IVF story has been out in the open and her willingness to talk about her struggles at getting pregnant is quite admirable. So many people suffer silently, thinking it is just happening to them.

Despite Kim Kardashian’s IVF struggles, she has a happy family of 6. We wish the best to the Kardashian-West clan.