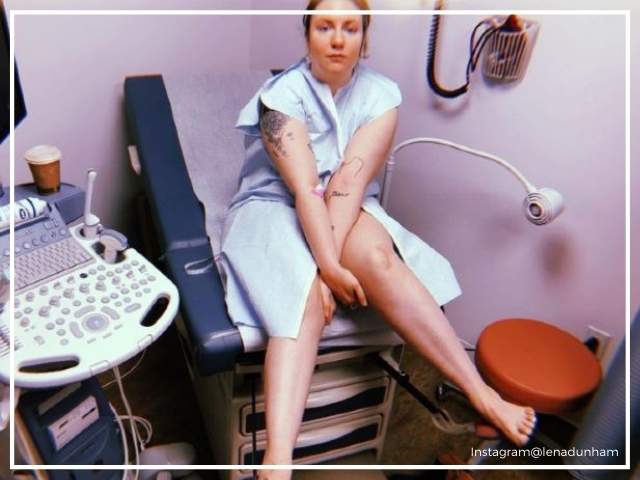 Lena Dunham’s IVF story resonated with a lot of women, but many are also critical of her views of the online infertility community, which they found to be ‘judgemental’ and ‘condescending’.

The American actor-producer opened up about her fertility problems including endometriosis and IVF failure, as she penned a rather vulnerable essay for Harper’s Magazine.

Most celebrities are lauded for sharing such a personal struggle on any public platform, but along with the appreciation, Dunham received flak for her condescending tone and choice of words. Once the piece came out, many users took to social media to complain about her ‘privileged perspective,’ which was deemed disrespectful to ‘IVF Warriors’ who are still struggling to conceive.

At the age of 31, when she had to undergo hysterectomy, Dunham felt a sudden desperation for a baby.

“The moment I lost my fertility I started searching for a baby,” she wrote. “After almost two decades of chronic pain caused by endometriosis and its little-studied ravages, I had my uterus, my cervix, and one of my ovaries removed. Before then, motherhood had seemed likely but not urgent, as inevitable as growing out of jean shorts, but in the days after my surgery, I became keenly obsessed with it.”

While she was still on bed recovering from the surgery, she started looking through adoption websites as they were “furniture outlets.”

“If I could no longer grow a baby in my womb, I could at least get one elsewhere, and fast. But there were a few obstacles. Some of the sites seemed too Christian to want me; others too back-alley for me to want them,” she said. “Plus, I could barely move, and I was tapering off opioids, so how was I going to handle a six-week trip to some foreign country to collect the child that I did not doubt was my God-given right? I wasn’t delusional enough to think that made sense. But wasn’t there some kind of delivery service?”

When family and friends asked her to slow down, Dunham didn’t think they understood her situation. She’d already broken up with her long-time boyfriend, adopted two hairless cats, and was in a new relationship, when she discovered that she was addicted to benzodiazepines.

Dunham decided to get her own life in order, before bringing a baby into it. “I went to rehab,” she wrote, “where I earnestly committed to becoming a woman worthy of the most f*ck-you baby shower in American history.”

So, in the next three years she did a stint in rehab, worked on her health and got back to exploring adoption. It was then that her doctor told her that there might be a chance to extract eggs from her remaining ovary.

“It turned out that after everything I’d been through—the chemical menopause, surgeries by the dozen, the carelessness of drug addiction—my one remaining ovary was still producing eggs,” the ‘Girls’ star recalled.

Her eggs were to be fertilized by a donor’s sperm and then a surrogate would carry the pregnancy, since her own uterus had already been removed.

During this period, she also became involved in online communities of women labelled ‘IVF Warriors,’ who were struggling to conceive. She described their discussions, saying they celebrate and mourn together, sharing diet tips, wellness strategies, cycle dates, and images.

“Once you’re inside, you learn the customs,” she wrote. “Celebrate when you start a cycle. Pray as you end it. Save any leftover medication for the next cycle, which is not only possible but probable. Brag: You gave yourself your own injections while your partner was golfing. You screamed at only one co-worker this week, and frankly she’s had it coming for months.”

While she hoped for a positive outcome, things for Girls alum did not go as she had hoped. “I learned that none of my eggs were viable on Memorial Day, in the midst of a global pandemic,” she wrote. “I was in Los Angeles when I got the call from Dr. Coperman, the slight Jewish man who was my entry into (and now exit from) the world of corporate reproduction.”

Six eggs were retrieved but none of them could fertilize into a healthy embryo. “Five did not take. The one that did seems to have chromosomal issues and ultimately… he trailed off as I tried to picture it… It was hard to understand that they were gone,” Dunham told People, as she recalled her conversation with the doctor over the phone.

“IVF destroyed my body—as a woman who tends towards rampant endometriosis, filling my body with estrogen … and because of what my body has been through, subjecting it to such excruciating pain, only to come to the end and learn those eggs were not viable after working so hard through illness and discomfort and going through anxiety and depression, it is just clearly not something I can ever repeat.”

Many women expressed on social media that they were appreciative of her for sharing the painful story.

“Thank you for articulating what is such an isolating and horrific experience. I also got off the fertility treatment train. It’s a massive decision and one not many understand,” tweeted one user.

“This is one of the most beautiful and funny pieces on this struggle I have ever read. Thank you,” wrote another user.

However, many others also found it offensive as they called her out for her “privileged perspective” on a sensitive topic.

“The shaming of ‘warriors’ here is disgusting. Your journey is your own but no need to tear down others who are doing whatever they can to get through this,” wrote a user on twitter.

“This is so unnecessarily hateful and condescending to other women going through what is essentially the same scenario you’ve experienced. It’s pretty self-absorbed and honestly disgusting,” said another.

Yet another person wrote: “Please for the love of god do not judge fertility medicine or the women seeking it based on Lena Dunham’s take on IVF. What a shallow and empathy-free take on the experience of millions of women.”

“Her experience was awful as it has been for many of us, but she has alienated herself in the way she speaks of the TTC community. It’s not a tribe I ever wanted to be part of, but the support from strangers is overwhelmingly wonderful. She’s blown that IMHO,” wrote one.

Dunham however says she actually shared her story to express solidarity with the millions of women, who’ve been struggling to conceive.

“I wrote this piece for the many women who have been failed by both medical science and their own biology, who have been further failed by society’s inability to imagine another role for them,” she wrote on an Instagram post.

The TV star hopes that her essay “starts a few conversations, asks more questions than it answers, and reminds us that there are so many ways to be a mother, and even more ways to be a woman.”

Lena Dunham’s IVF journey may have been a painful experience but it taught her something very important—to let go of what you can’t control.

“There is a lot you can correct in life — you can end a relationship, get sober, get serious, say sorry,” she wrote. “But you can’t force the universe to give you a baby that your body has told you all along was an impossibility.”

Lena Dunham’s IVF essay received mixed reactions from sympathising and upset users on social media. What do you think?