Mariah Carey, the pop singer most famous for her enviable vocal range, joins all the celebrities who have publicly opened up about their struggles with infertility. Mariah Carey’s IVF resulted in the successful conception of twins—a boy and a girl—but it was not without its complications.

The pop star was heading towards the age of 40 when she became determined to start a family with her husband, Nick Cannon.

However, the journey to a successful pregnancy was not quite as easy as she had envisaged. What drove Mariah Carey to IVF treatment and how did it work for her? We explore below:

Heartbreakingly, Mariah and Nick suffered a miscarriage after finding out that they were pregnant with their first baby. Shortly after their wedding in 2008, and just before the Christmas holidays, they attended an ultrasound where they were delivered the devastating news.

Talking in an exclusive interview with Billy Bush for Access Hollywood, Nick said that “It was emotional for both of us and that’s when I saw the strength.

While Mariah recalled that “It kind of shook us both and took us into a place that was really dark and difficult. When that happened… I wasn’t able to even talk to anybody about it. That was not easy.”

Mariah and Nick both agreed that this experience made them a much stronger couple and made them more determined than ever to start their family together.

Born in 1970, Mariah was approaching 40, as the couple tried desperately to conceive. Fertility starts to decline with age, with women over 35 years of age often taking longer to conceive and being more likely to have fertility problems.

IVF after 40 years of age can also be more problematic and is usually less successful.

Following their miscarriage, the couple struggled to conceive again and enlisted the help of a fertility clinic. Being such a high-profile celebrity, Mariah’s visits to her fertility clinic were well documented by the press, with many rumours and speculations.

Mariah and Nick underwent IVF treatment to help them to conceive for a second time. Additionally, Mariah has openly talked about lifestyle changes that she introduced to maximise their chances of IVF success.

Mariah states that on advice from fellow singer Celine Dion, who had her own struggles with infertility, that she tried daily acupuncture sessions alongside her fertility treatment, in order to reduce her stress levels.

It has been documented by many sources that acupuncture improves your chances of pregnancy in various ways.

“Celine was talking about acupuncture. I used to get acupuncture, and I had never thought (of it) with regards to the trying to conceive situation. I was (getting acupuncture), like, once a day at least. It was on a schedule, everything. For the first time in my life, I spent time in one place.”

“The main thing I did that was tough was to go on progesterone like every month… and then when I was pregnant, I had to stay with the progesterone for 10 weeks,” Mariah told Barbara Walters for 20/20 Friday Night.

Mariah and Nick successfully managed to conceive twins with the help of IVF. However, Mariah’s pregnancy was not smooth sailing either and was classed as high-risk for various different reasons. 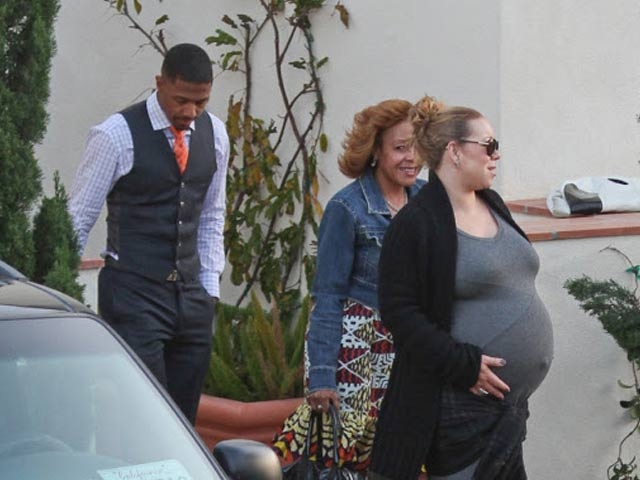 While carrying her twins, Mariah was diagnosed with both gestational diabetes and pre-eclampsia, which put her at risk of having pregnancy-related seizures. Due to these conditions, she was put on bed rest towards the end of her pregnancy, until the twins were delivered.

The singer has said that “I had a difficult pregnancy and was alone most of the time.” This was due to Nick working away a lot during her pregnancy.

Mariah has said that being pregnant has put her off having any more children. Due to her very difficult and traumatic pregnancy, she states that she would not wish to go through this experience for a second time.

Mariah and Nick’s twins were born early due to high blood pressure caused by the pre-eclampsia. They were delivered at 35 weeks via Caesarean section, when Mariah was 40 years of age. They were actually born on the couples wedding anniversary, April 30th, 2011!

Much to the couple’s joy, they had both a son and a daughter, named Moroccan and Monroe.

Regarding their choice of names, Nick told People magazine that they wanted something unique, but not crazy. “They won’t be crazy names like Carburetor or something. But they’re definitely unique.”

Sadly, in 2014 when the twins were 3 years old, Mariah and Nick divorced. Mariah revealed her shock at the breakdown of her marriage, stating that “I never thought I would have babies with someone and then get divorced.”

However, since their split they have remained extremely amicable, spending lots of days together as a family, for the sake of their two young children. They frequently share images on their social media accounts, showing happy family days out.

It is refreshing to see such happy images of a family, proving that despite Mariah Carey’s difficult journey into parenthood she is enjoying every minute of being a mum.

Do you have any thoughts on Mariah Carey’s IVF? Please share them below: