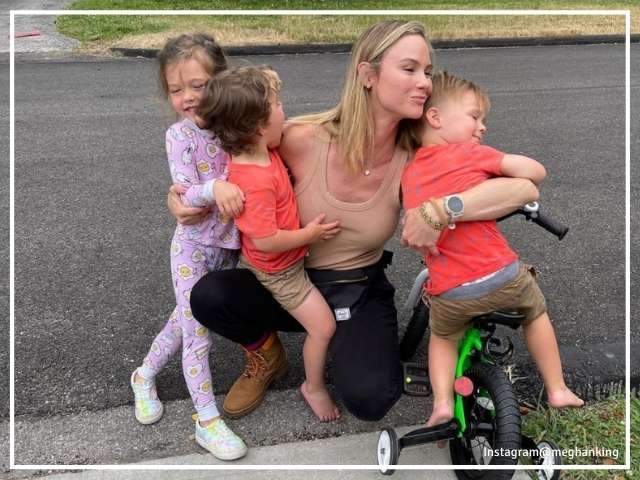 Meghan King Edmonds, star of the Real Housewives of Orange County, has announced via her blog that she underwent another cycle of IVF in the summer and is now expecting her second child.

The 33-year-old television personality also revealed that she and husband, Jim Edmonds, are expecting a baby boy and their one-year-old daughter is ready to don the hat of a big sister.

“So we’ve made it to the announcement: Aspen is going to be a big sister!” Edmonds wrote in her blog post. Pregnancies are hard to keep under wraps, especially if you are already a reality star, and Meghan shared that she is already 10 weeks into the pregnancy.

“It was so hard for us to keep it a secret from everyone especially since we shared our entire IVF journey with Aspen on RHOC from the very beginning. Tonight on the RHOC reunion you’ll see that I’m only one month pregnant, but that was filmed five weeks ago: we are now ten weeks pregnant (and I’m feeling every bit of it)!”

Meghan married the former MLB center fielder in October 2014 and they welcomed daughter Aspen in November 2016 with the help of in vitro fertilization.

Meghan revealed that only a few months after the birth of their first child, the couple realized they wanted to grow their family even further.

“When Aspen was only a few months old Jimmy and I knew we wanted to add another baby to the mix,” she said.

She wanted to have boy to balance their family, especially because Jim already has four girls and a boy from previous relationships.

“Yes, Aspen has half-siblings but we wanted her to be able to share in the joy of waking up to a sibling every day of her life.”

The couple had two frozen embryos from their previous IVF cycle so Meghan though she’d go though it again.

“This was a difficult decision for us. Jimmy was adamant he didn’t care about the sex of the baby, he just didn’t want me to have to again endure the emotional rollercoaster that comes with IVF. (If we had decided to transfer one of the female embryos my drug regimen would’ve been much less involved than full blown IVF.),” she explained.

“But I insisted: I was more comfortable with going through IVF again since I knew what to expect. So we moved forward with IVF.”

The reality star had shared her journey through the first cycle of IVF onscreen. She said that it gave her “the worst depression of my life”.

This time around, she found it easier as she had her support system —Aspen and pet pooch, Girly Girl. The couple waited for the baseball season to end before they start the treatment, so Jimmy could be present around her.

“I felt like I handled this IVF much more in stride,” Meghan wrote. “I’m not sure if it’s because I knew what to expect or if maybe my body was used to the hormones, but it was easier. I was also armed with the emotional mindset to be so much healthier this time around whereas last time I was surrounded by the stress of filming RHOC (which is VERY stressful and emotionally taxing).”

She also admits to have made significant lifestyle changes to cope with IVF—eating healthy, cutting out on alcohol, going for regular acupuncture sessions, and daily walks. “I also prayed, meditated, and read a lot,” she said. “I didn’t even watch emotional or negative TV shows. I just felt at ease.”

In a recent interview with ET, Edmonds talked about motherhood and the associated joy.

“I’m so obsessed with motherhood,” she said. “It’s all consuming. It’s all you do. That’s all you care about. Everything else is just peripheral.”

Reportedly, she hopes to have four or five kids

Meghan shared that this time around the doctor’s were able to retrieve 10 eggs from her ovaries, all of them were fertilized, and they had ten embryos.

At this point PGS was done to identify any genetic abnormalities in the embryos and also check their gender. By transferring genetically healthy embryos, you can eliminate the risk of a miscarriage.

“The way I see it is that if I get pregnant with a PGS embryo my chances of miscarriage are virtually eliminated except for an act of God,” Meghan wrote. “PGS also uncovers the sex of each embryo. Of our ten embryos, only four were chromosomally NORMAL: three boys and one girl! We were a bit shocked that 60% of our embryos were abnormal but so happy to have four VERY strong and perfectly healthy embryos.”

So embryo transfer was done and Meghan tested positive for pregnancy.

“I’m not feeling the greatest but we know that it will all be worth it in the end.  Aspen will make a fabulous big sister at only a year-and-a-half old in June 2018!” read her blog.

“Oh, what about the biggest question: Boy or girl? Think blue this time around!”

PGS is known to improve the success rates of IVF as it allows the doctor to study the genetic composition of the embryo and only choose the best ones to be transferred. Fertility clinics in Thailand claim success rates of 60-80% in IVF + PGD and many women flock there for low-cost IVF.

Do you have any experience with IVF? Please share your comments below