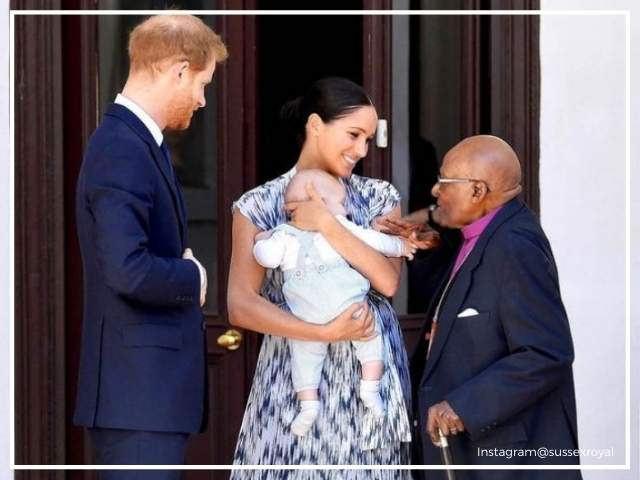 Meghan Markle and Prince Harry lost their second child shortly after he was conceived. The Duchess of Sussex talked about this painful chapter of their lives in an essay she wrote for the New York times. Meghan Markle’s miscarriage happened in July of 2019, when the couple was still living with the Royals in the UK.

She recounts that morning she picked up little Archie from his crib, changed his diaper, and felt a sharp cramp. “I dropped to the floor with him in my arms, humming a lullaby to keep us both calm, the cheerful tune a stark contrast to my sense that something was not right,” she wrote.

“I knew, as I clutched my firstborn child, that I was losing my second,” Meghan continued. “Hours later, I lay in a hospital bed, holding my husband’s hand. I felt the clamminess of his palm and kissed his knuckles, wet from both our tears. Staring at the cold white walls, my eyes glazed over. I tried to imagine how we’d heal.”

“Sitting in a hospital bed, watching my husband’s heart break as he tried to hold the shattered pieces of mine, I realized that the only way to begin to heal is to first ask, “Are you OK?” she added.

The reasons for miscarriage cannot always be determined but they are quite common. Infact, 15-20% of all pregnancies end in miscarriage, according to the National Infertility Association.

Acknowledging the difficulty of these times when people have been forced to be more isolated than ever, Meghan stressed on the importance of asking other people, if they are OK?

She recalled a moment from her and Harry’s tour of South Africa in October 2019. “I was exhausted. I was breastfeeding our infant son, and I was trying to keep a brave face in the very public eye,” she wrote.

“‘Are you OK?’ a journalist asked me. I answered him honestly, not knowing that what I said would resonate with so many — new moms and older ones, and anyone who had, in their own way, been silently suffering. My off-the-cuff reply seemed to give people permission to speak their truth. But it wasn’t responding honestly that helped me most, it was the question itself.”

“Thank you for asking,” she said. “Not many people have asked if I’m OK.”

Meghan Markle’s miscarriage is not the first in the Royal family—Sophie, the Countess of Wessex and Princess Anne’s daughter Zara Tindall both have suffered miscarriages, as well.

Even though they did not discuss about the miscarriage for a long time after it happened, it is reported that Meghan and Harry told close family members and had their support.

They thought this is the best time to share this with the public as the wound was still “raw” while they slowly recover from the trauma, a source close to the couple told Vanity Fair. “There’s a tone of hopefulness and optimism at the end of the article which I think shows where they are today. They are doing well.”

Miscarriages are common and the Duchess wanted to draw attention to this pain that many women go through, in silence.

“Losing a child means carrying an almost unbearable grief, experienced by many but talked about by few,” she further wrote. “In the pain of our loss, my husband and I discovered that in a room of 100 women, 10 to 20 of them will have suffered from miscarriage. Yet despite the staggering commonality of this pain, the conversation remains taboo, riddled with (unwarranted) shame, and perpetuating a cycle of solitary mourning.”

She goes on to acknowledge other women who have opened discussions about miscarriage, as she writes, “Some have bravely shared their stories; they have opened the door, knowing that when one person speaks truth, it gives license for all of us to do the same.

“We have learned that when people ask how any of us are doing, and when they really listen to the answer, with an open heart and mind, the load of grief often becomes lighter—for all of us. In being invited to share our pain, together we take the first steps toward healing.”

In the New York Times article titled “The Losses We Share – Perhaps the path to healing begins with three simple words: Are You OK?” Meghan also touched on the subjects of COVID, polarization and violence in the world, loss of life, and the grief it has caused.

The Duchess mentioned Breonna Taylor, a Louisville hospital worker, and George Floyd, who were both killed by police officers, and she also remembered everyone who has lost loved ones under difficult conditions during the pandemic.

Before the holiday season of 2020, she noted that the pandemic has separated many people from their loved ones leaving them “alone, sick, scared, divided and perhaps struggling to find something, anything, to be grateful for — let us commit to asking others, “Are you OK?” As much as we may disagree, as physically distanced as we may be, the truth is that we are more connected than ever because of all we have individually and collectively endured this year.”

Harry was reportedly fully supportive of Meghan writing the article and she chose the New York Times as she thought it was “a good fit.”

“In being invited to share our pain, together we take the first steps toward healing,” she writes in conclusion. “We are adjusting to a new normal where faces are concealed by masks, but it’s forcing us to look into one another’s eyes—sometimes filled with warmth, other times with tears. For the first time, in a long time, as human beings, we are really seeing one another.”

There was no comment from the Buckingham Palace as they respected that this was a deeply personal matter for Harry and Meghan.

Back in 2018, the couple had already announced their pregnancy when the miscarriage happened. Zara then received letters from many women, saying, “‘we’ve been through the same thing,’, which was incredible, it just showed how often it does happen.” Later, she was able to conceive successfully and gave birth to her second daughter.

Zara said that miscarriages are also difficult for men, who feel helpless in such situations. “It’s hard for those guys, too,” she said, “It was a horrible road.”

Sophie, the Countess of Wessex, and the wife of Prince Edward, also suffered a miscarriage when she had an ectopic pregnancy and collapsed at home in 2001. She had to be admitted to the hospital for a life-saving surgery.

Prince Edward had said back then that losing a baby like that “was about the most painful thing anyone can undergo.”

Fortunately, they went on two have two children—a son and a daughter—later.

Healing from the pain of miscarriage

Meghan Markle’s miscarriage was kept private “for months because it was very painful and not anything that they knew if they would ever want to share,” a source told People magazine. “They both seemed shocked at how painful it was. Meghan was ready to share now because so many women go through the same thing in silence.”

Meghan and Harry are now nicely settling into their new home in Montecito, California with their 19-month-old son, Archie. “They are doing well,” said a friend of the couple. “They are in good health.”

The power couple has recently introduced their new organization name Archewell after their son, with the aim of encouraging compassion in action.

Meghan Markle’s miscarriage must have been extremely painful and it is very thoughtful of the Duchess to share about it in solidarity with all the couples who have gone through the same.

The world seems in a disarray and many of us are going through difficulties but in the same spirit, we want to ask you, the reader: Are you OK?