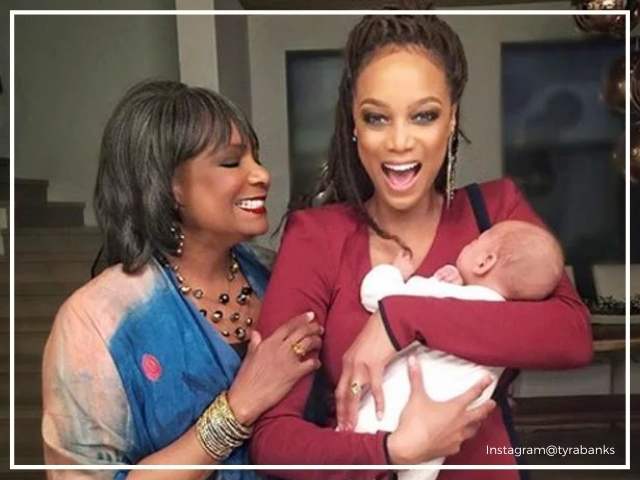 Supermodel Tyra Banks’ IVF journey has been challenging yet inspiring as she talked about going through infertility and failing multiple cycles of IVF, all under the public eye. After years of trying, she conceived her son, York, in January 2016 via surrogacy.

The first time Banks opened up about her struggles was in her own talk show FABlife in 2015, while she was interviewing Chrissy Teigen, who talked about her own fertility struggles and going through IVF while shielding herself from the media  and their personal questions about conceiving.

Banks suddenly got the camera to zoom in on her face and revealed her own ordeal.

“I want to co-sign what Chrissy is saying and say ‘You have no idea what people are going through,’” she said, fighting back tears, while urging people to stop questioning about pregnancy.

“Why am I crying? You just have no idea what people are going through, so when you ask Chrissy that or me that or anybody that, it is none of your frigging business, okay?

Why don’t you have kids?

“I am so tired of seeing on my social media, ‘Why don’t you have kids?’ You don’t know what I’m going through, you have no idea,” she said.

“For any women, it is none of your business what somebody is going through.

Tyra banks continued the conversation by sharing her story of how her plan for kids kept postponing to the point where it became a challenge to conceive.

Women over the age of 30 are often blamed for putting their career over kids and the two models discussed how in all cases the women are seen as the problem but the level of pain experienced is often difficult to comprehend by people who have not gone through it personally.

Tyra banks opened up about more intimate details on her pregnancy in her memoir ‘Perfect is boring’ that she co-authored with her mother, Carolyn London.

London also talked about her emotional turmoil due to the failed attempts, as she said, “It hurt me so much to watch her struggle through that. She set up a nursery and, in the bathroom, she put a tile in the floor that said, ‘Mommy Already Loves You.’ And then she found out the IVF had failed.

“It ripped my heart out.”

Tyra Banks tried to have a baby with her then-boyfriend, photographer Erik Asla, but after a while they realized it could be difficult to conceive naturally because of their age, so they decided to go for IVF.

In a detailed conversation with People magazine, she spoke about her book, and the complicated stages one goes through to get pregnant. Up till the point where she turned to surrogacy, with every embryo, she was right on the edge until her son was born.

“There are so many stages of pregnancy. It’s like, ‘Okay, it’s a healthy embryo. Okay, it’s month one.’ I was just constantly living on edge until I held him for the first time,” she said, adding how many people have no idea about the difficulty some couples go through to battle infertility and have a child.

While filming cycle 22 of America’s Next Top Model in 2015, Banks was reportedly giving herself stimulation injections.

On Cycle 22’s final runway, at the [Walt] Disney Concert Hall, she went into a back closet to give herself the final shot, in what was her seventh round of IVF.

She also revealed that she got pregnant in that round, but obviously she miscarried.

Speaking about the complicated process of injectable drugs and the medications required for pregnancy, she explained, “I’ve had some not happy moments with that, very traumatic moments. It’s difficult as you get older. It’s not something that can just happen.”

Surrogacy and the birth of her baby

Even though IVF is one of the most effective ways for infertile couples to have a baby, there is no guarantee on how it works for different women. There are many reasons why IVF fails but no definite conclusion as to what can be done to make it work.

Banks’ journey, which went on for over an year of constant failed attempts, took a toll on her mental strength.

“I was really going overboard. I probably would have had to go to the hospital if I didn’t slow down,” she told the USA today.

The TV show host openly spoke about the not so attractive side of wanting to have a baby, which brings a lot of ups and downs that are difficult for women to handle. She tried to find the right balance between trying to have a baby and her work which all got to her.

She said that she was aware and had expected it to be harder due to her age but to keep going after receiving false hope after every failed cycle was the challenging aspect. After seven cycles of IVF, she opted for surrogacy, which led to the birth of her son.

Banks often speaks about raising her son as a rewarding experience making her past struggles worth it.

York is growing up fast. He can count up to 20 and already speaks three languages—Norwegian, Spanish and English. “He’s a smart one — but he’s still crazy and damn near rolling on the floor and not listening to me most of the time,” the beaming Banks told reporters at the AGT season 13 kickoff event.

Managing her work commitments with parenting might be a tad difficult but Banks has a lot of support. All that anxiety is now gone, as having York forced her take it easy.

She’s raising the kid with her mother and now-separated partner, Asla. “We are co-parenting and doing such a great job raising him that I don’t have to do less. So it’s like this beautiful village around York. But I’m there every day,” she says.

Among the feelings of shame or being inadequate is the feeling of not wanting to feel alone in the journey. Social media has helped people share their struggles online with an online support system that only the internet could provide.

Tyra Banks’ IVF failures and inability to have a baby made her afraid that the world will see her as broken. She didn’t feel like less of a woman, but she did blame herself for having waited too long to get pregnant.

Women around the world find it difficult to strike a balance between work and pregnancy. Some struggles end with a happy ending like with Banks and her son York, but there are also those who have to settle without a baby even after IVF.

Banks calls out for women to support each other and not blame the ambitious ones. “Working women, you know, have respect for that working woman that might not want a child now, and let’s not attack each other and feel like, ‘Oh, you’re doing that but you need to do this,’ and just remember, you never, ever know what somebody is going through.”

Infertility Aide hails celebrities like Tyra Banks, who help others by coming out to discuss about the struggles to conceive. If you have any messages for the TV star, please share below