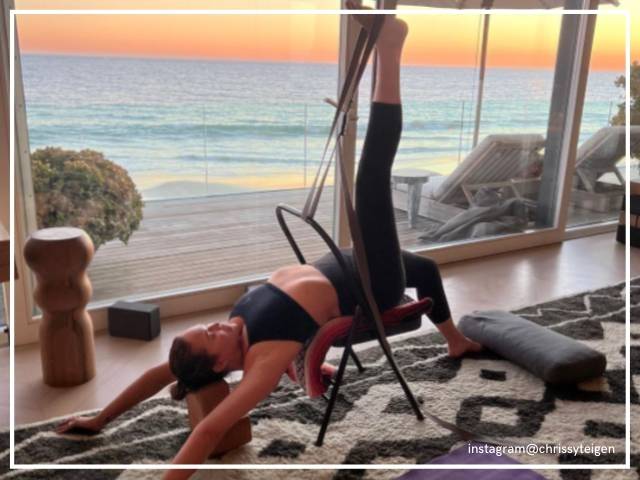 After sharing about the devastating loss of her 20-week pregnancy in September 2020, Chrissy Teigen is going for IVF again, and she is transparent, open, and positive as we expect her to be.

The mother-of-two put out a candid post on Instagram on February 20th, sharing: “I wanted to let you guys know I’m balls deep in another IVF cycle to save as many eggos as I possibly can and hopefully make some strong, healthy embryos. I honestly don’t mind the shots…they make me feel like a doctor/chemist…but the bloating is a bitch.”

36-year-old Teigen is married to John Legend, 43 and they have two children, Luna, 5, and Miles, 3, who were both born via IVF. The couple are now keen to expand their family, and despite previous heartbreaks, they are going into it with a fresh perspective.

“They consider themselves lucky to be in a position where they can try,” a source told Us Weekly. “It’s thanks to John’s love and support plus his levelheaded-ness that Chrissy’s been able to stay so positive and strong. They’re taking it step-by-step but both feel confident and optimistic.”

Teigen also brought up something that a lot of women in that position would resonate with: she asked people to stop asking about her pregnancy.

“I humbly beg you to stop asking if I’m pregnant because while I know it’s said with excited, good intentions, it just kind of sucks to hear because I am the opposite of pregnant!” wrote the supermodel, who is also an author, entrepreneur and a TV host.

“But also like please stop asking people, anyone, if they’re pregnant,” she added. “I said this in the comments and got yelled at because the internet is wild but I’d rather be the one to tell you and not some poor woman who will look you in the eyes through tears and that’s how you finally learn.”

Helping those struggling with infertility

Teigen has recently partnered with RESOLVE: The National Infertility Association of the US to launch Fertility Out Loud, to assist others couples who are suffering from infertility.

She has always been open about her own experiences, however traumatic they might be, and even joked about the difficult process of IVF.

Even when she lost her unborn son, Jack, at 20 weeks in September 2020, she shared heartbreaking pictures of herself and her husband right from the hospital bed along with a message for the son they lost. She later also detailed it on her blog on Medium.

While several people called them out for clicking pictures and taking to social media at such an emotional time, others supported the cause and the awareness they draw to the subject by sharing these intimate moments. Most people undergo such experiences in isolation, so it adds so much more value to the few who speak up openly.

“I’ve been open about so much throughout my life, and so [infertility] didn’t seem like a crazy thing to talk about. But the more I spoke about it, the more I realized how taboo it was,” Teigen told Refinery29 over the phone.

“But quietly, I was getting DMs and letters — like handwritten letters — and emails. I realized that people didn’t think they could talk about it on an open forum, but they were happy to do it privately. I realized people don’t feel comfortable talking about this.”

She had once scheduled a Sports Illustrate cover shoot, which coincided with her IVF treatment back in 2016, and that was a mistake.

Teigen thought the process would be pretty straightforward—inform them of the periods, starts the medications, and retrieve the eggs. Well, it sounds simple but not when you’re the one going through it.

As Teigen said, “The process of leading up to it, getting your body ready for it, it can be brutal. There are a lot of shoots I look back on now and I’m like, Oh man, I was extremely bloated for that. Or, you know, you’re bruised from all the shots that you’re doing. I naively thought that harvesting was like, you just take a rake and you go in and you’d take them off. Nope. It wasn’t that at all.”

Besides the losses, the difficulties, Teigen has also shared helpful tips and the good parts of her IVF journey.

During her first IVF, the embryo transfer had failed in the initial attempt, and she opted to get an acupuncture treatment for pregnancy before taking another chance.

“I remember having an acupuncturist come in because our first embryo hadn’t taken and I had really regretted that I hadn’t done acupuncture for some reason. When they inserted her little egg, it just shot across like a little shooting star,” Teigen wrote. “Seeing it, and then praying that it would stick and stay, and sure enough, she did. And now she’s about to be five years old.”

Being told that she shouldn’t try to get pregnant again is still not easy for Teigen, and she believes that ever since being treated for endometriosis, she feels her body and her uterus are healthy.

“Jack was so healthy, and it was just something with my body that was not right at that time. In my mind, I’m like, I need to try again, though. I want to try again,” she said. “I believe my body’s in a better place than it was. And it’s hard to be told that you shouldn’t when you genuinely believe that you could. It’s hard to come to terms with and something that I talk about, honestly, twice a week still.”

Teigen admits how she loves the role of a mother and finds that her children bring “light and life to our household and to the world.”

Even though she doesn’t understand what causes her infertility but knows that they have been fortunate to meet so many people who helped them along this journey as she also stresses on the importance of having more open conversations on the subject.

As Chrissy Teigen goes for IVF again, we send her good luck wishes and fully support her call for more awareness about infertility.

Chrissy Teigen’s Doing IVF Again and Has a Message for the Public: ‘Stop Asking If I’m Pregnant’, Self https://www.self.com/story/chrissy-teigens-doing-ivf-again