She was conceived in 1992, born in 2017. Emma Wren Gibson, born from an embryo frozen for 24 years, is a miracle to her mother. Tina and her husband, Benjamin Gibson, adopted Emma’s embryo at the National Embryo Donation Center (NEDC) in Knoxville, Tennessee, earlier this year.

The embryo had been donated by a couple on Oct. 14, 1992. Embryo donation is a simple procedure in which the couples, who have successfully conceived in an IVF cycle, choose to donate their healthy embryos to other potential parents.

The embryos are usually frozen and available for adoption to others. This is however the first case in which a baby has been born from an embryo that was cryopreserved so long ago.

When Benjamin Gibson got married to Tina around seven years ago, they knew that having children naturally might not be possible. Benjamin suffered from cystic fibrosis, a health condition in which men may be rendered infertile.

The couple had decided to adopt a child and they fostered several children in the meantime.

Just last year, Tina’s father talked to them about embryo adoption—something he’s heard on news. She immediately took to it and sent an application to be considered in August 2016.

Then earlier this year, as she was preparing for the transfer of embryos, she was told that her case could lead to a “world record.”

MIRACLE BABY: Emma Wren was born after being frozen for more than 24 years as an embryo. Her mother says she’s a miracle and will have quite the story to tell someday. @wbir READ: https://t.co/iSAw1Yk1jQ pic.twitter.com/k6TFCqLJNg

According to the NEDC website, 75 percent of the donated embryos remain viable after the freezing and thawing process, and 49 percent of those transferred result in babies being born. 686 babies have been born from frozen embryos at NEDC.

Miracle to her parents

She might be a world record baby for scientists but to her parents, Emma is just delight.

“Emma is such a sweet miracle,” said her father, Benjamin Gibson. “I think she looks pretty perfect to have been frozen all those years ago.” 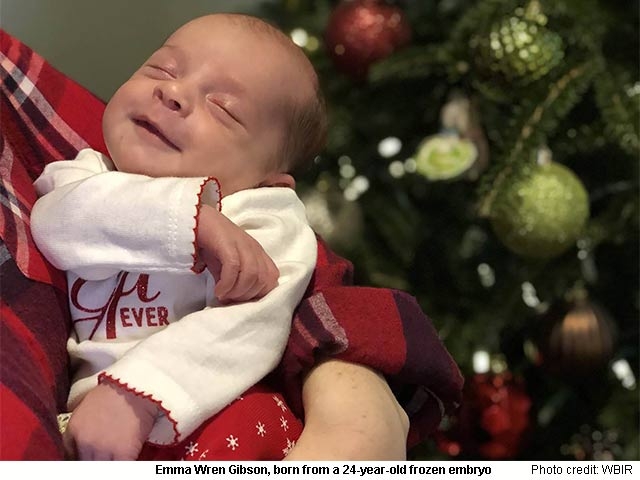 Tina and Benjamin said they only wanted to adopt an embryo, whose parent looked similar to them. Although Tina gave birth to her, neither of the parents is biologically related to Emma.

Is it really the oldest frozen embryo?

It is impossible to determine if this is actually the oldest embryo baby because records of fertility clinics are usually kept private. But most experts agree that if not the oldest, it is certainly one of the oldest as of now.

Sean Tipton, spokesman for the American Society for Reproductive Medicine, agreed that such claims cannot be verified easily.

However, all experts agree that the duration of cryopreservation is not very important as it has no impact of the life of the baby. Frozen embryos are known to do as well as the fresh ones.

The only risky stage is the thawing (de-freezing) part. The embryos that survive that can certainly make healthy babies.

Doctors at the faith-based NEDC that provided the frozen embryo encourage couples to donate the embryos they don’t need, so they can help other families. They are called “snow babies,” because of how they are kept, reports the BBC.

As multiple eggs are collected and fertilized, most IVF cycles result in surplus embryos. The couples can choose to do one of the following:

Once the couple has conceived, it is likely that they will not need any more of their embryos. A positive conception is also an indication of good quality of the embryos, which could possibly be useful to another couple struggling with infertility.

“We say that our reason for existence is to protect the sanctity and dignity of the human embryo. We are big advocates of embryo donation and embryo adoption,” their marketing and development director Mark Mellinger told CNN.