Smoking and pre-eclampsia may cause fertility problems for offspring 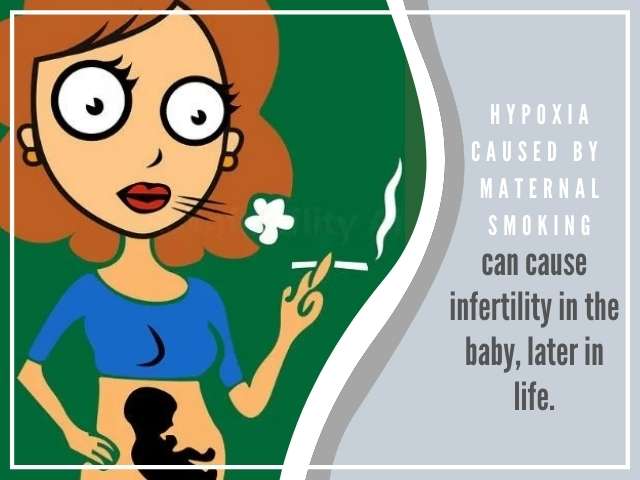 Hypoxia (low levels of oxygen in the womb) caused by smoking and pre-eclampsia may cause infertility for the offspring in the womb, later in life.  These findings were revealed in a recent research conducted by the University of Cambridge based on a study of rats, which premeditated that lower levels of oxygen cause faster ageing of the ovaries.

The study was conducted to help draw the parallels on how low oxygen supply translates into problems in the pregnancy.

Dr. Catherine Aiken from the researchers explained, “It’s as if low levels of oxygen caused the female’s ovarian tissue to age faster. Biologically, the tissue appears older and the female would run out of eggs—in other words, become infertile—at a younger age.”

Simply put, it was observed that low oxygen supply sped up the ageing process of the ovaries in the fetus that led to low ovarian supply at a rather young age.

What is intrauterine hypoxia?

Intrauterine or gestational hypoxia is a condition that occurs when the fetus does not receive adequate amounts of oxygen for development.

It may be caused due to:

Intrauterine hypoxia can result in poor growth of the fetus in the womb and even sudden infant death syndrome (SIDS).

Deep cellular damage usually occurs in the central nervous system. It is diagnosed through fetal oximetry. It affects the cardiovascular system and is also linked to neurological disorders such as cerebral palsy, epilepsy, ADHD, and eating disorders.

It is common knowledge that low oxygen supply in the womb also increases the risk of heart diseases in the offspring.

Another study drew conclusions towards the fact that the growth of the fetus and its cardiovascular health are all adversely affected due to the lack of oxygen supply.

It specifically states that the level of oxygen is not too significant during early stages of pregnancy but it becomes an important factor once the organs start to develop, during second the third trimester. Some known congenital cardiovascular malformations may also occur due to the mother’s exposure to a persistently hypoxic environment, the study found.

Hypoxia can be avoided by not smoking while pregnant but there are some other unavoidable factors such as high altitude and medical conditions such pre-eclampsia.

These findings by Dr. Aiken may be helpful in encouraging healthier pregnancies by avoiding problems that can happen due to low oxygen levels.

Pre-eclampsia is a serious pregnancy complication that women face mostly in the second half of their pregnancy. In this condition, the placenta may not receive sufficient blood, causing your baby to be born very small.

Ironically, the best treatment of pre-eclampsia is delivering your baby. If the baby is 37 weeks or above, your doctor may advise on delivery before the situation gets any worse.

If not immediately treated, the condition can end up being fatal for the mother and baby. Some women are diagnosed with the condition early on, in which case you must consult the doctor regularly to ensure the pregnancy proceeds safely until the baby is developed enough for delivery.

Rats are a useful subject to study pregnancy as their biological features have many similarities to us humans. While their pregnancy period is shorter, it becomes easier to study the gestation of the rats as their fetal development is faster.

This rapid ovarian aging causes the total reserve of ovaries to decrease earlier in the offspring. This can cause several complications in the pregnancy of the next generation progeny.

The Cambridge research team is now looking for an anti-oxidant medication to counter the effects of hypoxia and undo the damage caused.

How does low oxygen affect fertility?

When lowering of the oxygen levels, the number of ovarian follicles in the reproductive tract also decrease. In a woman, during each menstrual cycle, every follicle will grow with at least one egg.

While these follicles indicate the number of eggs, they do not determine the quality of the egg, which is an important factor for successful conception and pregnancy. The quality of the egg is dependent on other factors such as age, lifestyle, and overall health.

When performing IVF in women over 40 or those with a limited ovarian reserve, a fertility specialist usually ends up collecting very few eggs, which reduces their chances of success.

Even though you only need one good quality egg for a successful pregnancy, the number of eggs is also significant. The higher that number at any age, the higher will be your odds of conceiving.

Further research on the effects of hypoxia caused by smoking or pre-eclampsia on pregnancy will allow us to know what causes problems in conception, what action to take, and how to assist more women in having safe pregnancies.

Various researches have established that lowering of oxygen concentration during pregnancy can cause many problems for the baby to be born, including infertility.