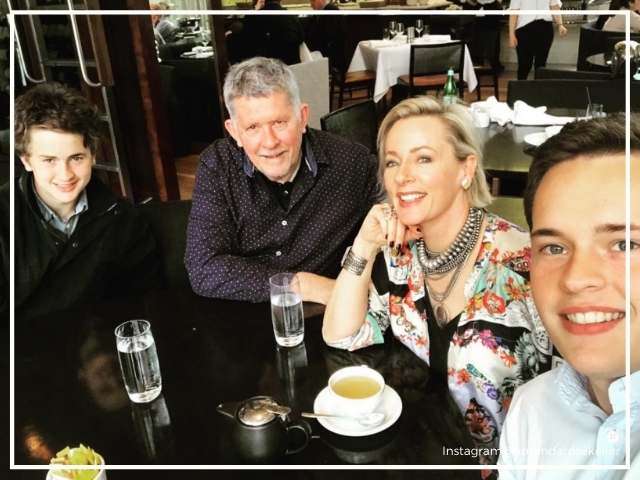 TV and radio presenter Amanda Keller’s IVF journey led her to becoming a mother, but she admits it was a difficult phase and that entire struggle is “still raw” in her mind.

Keller gave birth to her first child when she was 39 years old. Her son Liam is now 16 years old but on WSFM’s Jonesy & Amanda recently, she said, “I’m still close enough to the person who went through IVF back then to be amazed at how far we’ve come.”

Keller decided to share her fertility struggles on air, on the 16th birthday of her elder son.

Recalling the moment of joy at Liam’s birth, she said she felt being embraced by the listeners of her show in Sydney, who had been following her IVF journey.

“I’m going to get all teary, but on the morning we announced his birth…just this giant, wonderful, loving hug from Sydney – that’s how it felt for me,” she told co-host Brendan Jones on the show.

“There had been years and years where I had been trying to have a baby. And when I announced that I was pregnant, everyone was on the ride with us – it was just wonderful.”

Now that Liam is all grown up, Keller shared a picture of him playing football, and described how proud she is of him. “He’s a real gentle giant,” she said. “He’s massive, he’s a big unit – but yet he has the softest soul.”

Keller describes her first-born as a “renaissance man—he likes his sport, he likes his academic work at school, he’s funny… he’s a beautiful, beautiful boy.”

Luckily for Amanda, after a short while, she conceived again with the help of IVF.

“We had looked down the barrel of none and within a couple of years, these two babies, just amazing.”

Back in 2015, Keller had shared the challenges to her journey to motherhood in her memoir, Natural Born Keller.

The TV Week Gold Logie nominee mentioned that she naturally assumed that she’d become a mother one day, but the process wasn’t easy or straightforward as she’d expected.

She underwent fertility treatments for years, and dealt with much heartbreak before she could get pregnant.

“But one hung in there and finally, after so many sad visits to the ultrasound unit, our lives changed tack in the best possible way,” she wrote. “We detected a heartbeat. A tiny flashing speck amidst a sea of what looked like submarine signals. Evidence, finally, that there was something there.”

Some of Keller’s fans, who were part of her joy during Liam’s birth, still remember the day he was born.

“And I still have people in the street who say I remember when Liam—or Norbit as he was known in the womb—was born.

“It’s almost like a touchstone for a lot of people that it was 16 years ago today.”

Only about 40-50 percent of IVF cycles result in a pregnancy. There are many reasons for failure of IVF but it is not always clear what are the factors that are blocking your pregnancy.

When you get something after a long struggle, it is natural for some fear to set in and you don’t want to lose it.

In a recent interview with Chezzi Denyer on her podcast Mum Stories, Keller described her fear about losing Liam in the early stages of her first pregnancy.

After the embryos were transferred, she started to bleed at one time, and thought “I’d been so close. Please, please, please, I kept praying. But that bleeding was the other embryos coming away. And Liam stuck.”

She then saw the doctor to confirm. “I could feel the whiff of change, and after I saw the heartbeat following a trip to the doctor, I stopped the car and just cried.”

Infertility is difficult for everyone. However, for public-figures it is even harder as they have to balance the inner turmoil while maintaining a balanced facade on the outside.

So, while Keller was dealing with her infertility problems, only her close friends were aware of her situation, while other people wondered why she didn’t have children by her late 30s.

“It was hard putting up with people’s perception of why I didn’t have children,” she says, adding that her fertility journey is still very fresh in her mind.

“I’m not far from those days where I thought it would never happen. That is still a big part of me. It’s still raw in there somewhere.”

The only thing easier for celebs is that they don’t have to worry about the costs as they can easily afford multiple cycles of IVF. However, you don’t have to despair either—you can get affordable IVF at our trusted clinics. Get in touch via the form to know how.

Telling her children about their IVF conception

When Liam and Jack (her younger son) were old enough, Keller decided to tell them that they were conceived through IVF, and they didn’t seem to care one bit.

“They didn’t give a rat’s arse,” she laughed.

Over the years as her boys were growing up, she used to talk about them on the radio, but now she tries to hold her tongue because “they probably find me embarrassing, especially when I make some millennial joke,” she says.

We are thankful to all women like Amanda Keller, who open up about their infertility struggles and give hope to other women.