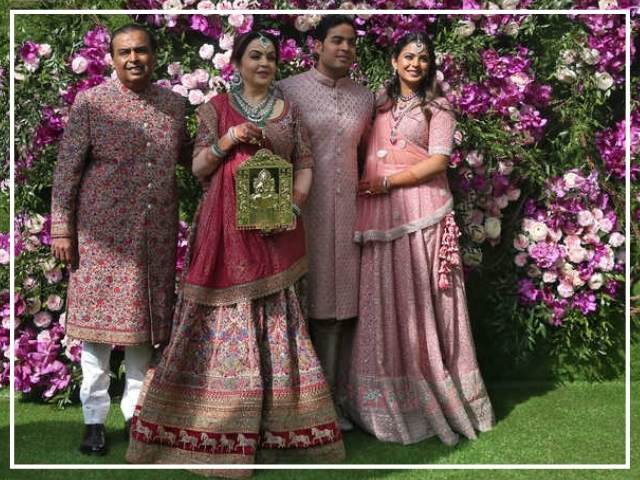 Even the people who seem to have a perfect family, might have had trouble putting it together. Isha Ambani, daughter of the richest man in Asia, Mukesh Ambani, recently talked about her birth via in vitro-fertilization and how her parents struggled to conceive initially. Here’s what she said about her parents Nita and Mukesh Ambani’s IVF story:

“My parents had us after eight years of marriage—my twin Akash and I were IVF babies,” Isha told Vogue Magazine. “When my mother finally had us, she wanted to be a full-time mum, initially. Later, she went back to work when we were five, but she was still a tiger mom.”

Ms. Ambani recently wed her beau, Anand Piramal (also a billionaire’s son), in a grand wedding, which was attended by dignitaries and leaders from around the world. Among the guests were former US Secretary of State, John Kerry, and former US First Lady, Hillary Clinton, and the attendees were entertained by a special performance by none other than Beyoncé.

Isha Ambani is not just the Reliance heiress; she’s an Ivy-league graduate and the brains behind India’s fastest growing telecom network, Jio. She sits among the boards of directors of telecom giant as well as Reliance Retail, India’s largest retailer in terms of revenue.

Talking to Vogue, she revealed intimate details of her childhood, her father Mukesh Ambani, and Reliance, one of India’s top industries, which boasts of over $90 billion in annual revenue (for the year 2020).

Her candid talk of infertility was highly applauded as it is still considered a taboo topic.

The diagnosis of infertility comes with mental and emotional stress for most people and Nita Ambani, the power woman, who sits on the International Olympic Committee and is among the most influential women business leaders in Asia, was no exception.

The fact that Mrs. Ambani underwent IVF was not widely known until recently. You can imagine the emotional upheaval a person goes through during these procedures, and the amount of time it takes to come out to the open to talk about it.

Many women are now coming forward to talk about their struggles and getting your fertility tested in time can help you get a better grip over the situation.

The first time Nita disclosed about her pregnancy issues was seven years ago, in an interview with NDTV Good Times. She had been diagnosed with infertility when she was only 23.

“Even when I was in school, I would write long, copious essays titled, ‘When I’ll be a mother…’ Here I was at the age of 23 being told that I would never conceive. I was shattered,” she said.

However, she went on to take help from Dr. Firoz Parikh in Mumbai, and luckily conceived twins—Isha and Akash, both now 27.

Mrs. Ambani also talked about the difficulties she faced during the pregnancy and the premature birth of twins that put her in a situation of medical emergency.

Recalling the difficult birth of her twin children, Nita said, “I was in the US and Mukesh had just left me and returned to India. As soon as he landed, he got a call saying, “Get back to the US.” Mukesh, Mommy, and our doctor got onto the flight. On the plane, the pilot gave the news – “You’ve been blessed with twins –a boy and a girl!

“After a long eight-year wait, I did get pregnant. It was a traumatic pregnancy, but no amount of pain deterred me…”

Three years after their birth, she conceived her youngest son, Anant Ambani, naturally.

Nita Ambani has often talked about her love for children, which probably started while she was a teacher at school. Today she is an active businesswoman, a socialite, a sports-team owner, and as we have often seen, an extremely caring, loving mother to her three children.

She also runs the Dhirubhai Ambani School in Mumbai, which she had founded back in 2003.

The diagnosis of infertility can be rather difficult and is often hard to come to terms with. The best way to deal with it is to consult an expert, educate yourself, understand your body and the possible causes of your infertility. There are different ways to improve your sperm count and even your egg quality for conception and with the right advice, you may be able to overcome your fertility issues and even conceive naturally.

Inadequate medical regulation and mushrooming IVF institutions, makes things difficult as often people are overwhelmed with options while searching for the right fertility clinic. Take your time and if required, consult with more than one expert before committing to treatment, which is quite expensive and offers no guarantees.

At Infertility Aide we laud all the women of influence who are coming out to share the stories of their infertility struggles and talking about the importance of being transparent in such situations.

Infertility can be isolating; any candid discussion can inspire hope in the hearts of millions of people who suffer worldwide. The goal is to find acceptance in your own feelings and be motivated by receiving understanding from other couples who have been there.

Nita and Mukesh Ambani’s IVF treatment gave them twin babies, one of whom is now expanding his own family.

Isha’s twin brother Akash, and his wife Shloka Ambani, who got married in March of 2019, welcomed their first child on December 10, 2020.

The Ambani family released a statement announcing the birth of the baby:

“With the grace and blessings of Lord Krishna , Shloka and Akash Ambani became proud parents of a baby boy today in Mumbai. Nita and Mukesh Ambani are delighted to become grandparents for the first time, as they welcomed the great-grandson of Dhirubhai and Kokilaben Ambani.”

They also released the picture of a beaming Mukesh Ambani with his just-born grandson as congratulatory wishes poured.

Isha Ambani and Anand Piramal became parents to twins – a girl and a boy, on November 19, 2022. The babies have been named Aadiya and Krishna.

The delighted family released a statement announcing their birth: “We are delighted to share that our children Isha and Anand have been blessed by the Almighty with twins on 19th November 2022.”

Isha went to the US for her delivery, and the Ambani and Piramal families were seen celebrating together at her Worli home, to welcome the babies in India.

We’re grateful to Isha Ambani for bringing up this topic and sharing about Nita and Mukesh Ambani’s IVF journey.