Husband comes on TV to talk about Kenya Moore’s IVF 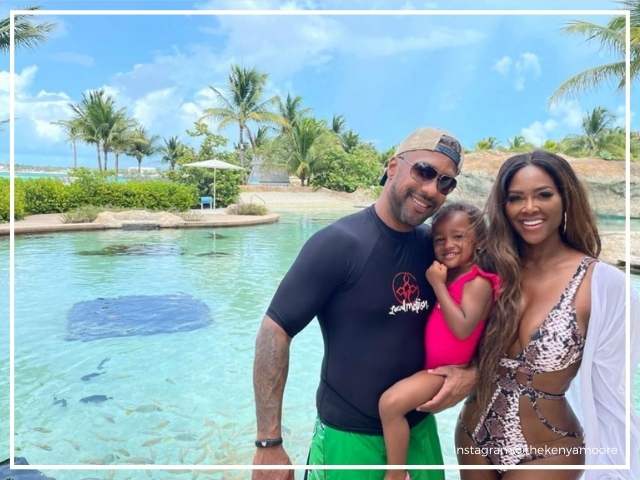 A special guest recently stopped by The Tamron Hall Show to talk about Kenya Moore’s IVF in Barbados. Her husband, Marc Daly, made a rare television appearance to talk about his perspective on going through infertility. The couple was accompanied by their daughter, Brooklyn Daly.

The Real Housewives of Atlanta star had learnt all about the difficulties of the procedure and prepared herself for what she might have to endure before she underwent IVF in Barbados. But luckily, she did not face any troubles and was able to conceive in her first round. The couple welcomed their baby, Brooklyn Doris Daly, in November 2018.

“You agreed to come out because you really wanted to talk to other men, other husbands, significant others, partners going through this,” Hall said to Marc Daly, who was there for the male perspective on IVF. “What was it like for you?”

“It’s incredibly challenging because the success rate for these treatments are very low,” Daly said. “So, there’s a lot of disappointment, expectations, and you also have to be prepared for disappointment so just being there, being supportive, being hopeful, and being just positive and being behind her is what it’s really about.”

The IVF procedure involves regular hormonal injections for the female, which are usually self-administered by the patient, over the course of almost two weeks.

“To be fair, I never did that. I hate needles so I didn’t do that,” Marc said, admitting he could not get himself to administer the injections for his wife. Kenya did it herself but admitted that she also had a fear of needles. Tamron Hall shared the episode on her Instagram.

She said that she hyperventilates on just seeing a needle and was hoping to get a nurse to do the daily injections. But the IVF needles, being so small, did not hurt and she thought it wasn’t a big deal to give herself the shots.

“I don’t have a horror story,” Moore told PEOPLE about her IVF. “It’s weird because you hear other people’s troubles with the injections and the hormones. And for me, it was a pretty simple process.”

Kenya was 46, when she met the love of her life. They got married after a few months of courtship and wanted to start a family immediately. When they could not conceive naturally, the couple turned to IVF in Barbados.

Success rates in IVF after 40 years are typically known to be low but luckily Kenya Moore’s IVF was a smooth process that brought her success in the first attempt.

The ovarian stimulation went well for her but the only “thing that hurt the most was them sticking me with the IV when they had to extract the eggs because my veins are so tiny,” she said, “But that’s the only thing that was uncomfortable. The rest of it wasn’t painful.”

The safety of IVF drugs is questioned sometimes as they cause side-effects in some women, but for the RHOA star, it wasn’t too much of a problem.

Kenya was always vocal about her IVF and never made an attempt to hide her fertility problems, hoping that’d make it easier for other women facing infertility.

Kenya Moore was advised not to do the OTC pee test as they are not always accurate; it could come out negative, when it is actually positive. She waited to have the blood test at the clinic.

“I was nervous because I hate to have my blood drawn. And then the technician who was drawing my blood said, ‘Did you cheat?’ And I said, ‘What do you mean?’ And she said, ‘Most people go and they’ll take the test over the counter.’

And I said, ‘No because it’s not as accurate as the blood test and I just don’t want any false alarms or to be let down when I really wasn’t supposed to be and it’s only a few hours away, so why not wait and get the proper results?’”.

“It was just overwhelming. I could not wait. And it was positive,” she said. “And then I got the call from the doctor later that day confirming that I was indeed pregnant and had a positive test and what my HCG levels were. She said it was all really good news. I was like, ‘Oh my God, I don’t know what to say!’”

Towards the end of her pregnancy, in the final weeks, Moore suffered from preeclampsia, which caused high blood pressure, and excessive swelling from fluid retention. Again, she shared about her condition with her fans on social media.

Kenya delivered her baby girl after an emergency C-section and posted a picture of her rather flat abs and almost-perfect curves just within three weeks, even though she was not allowed to work-out.

She credited her body to her pre-baby wellness routine, saying she doesn’t want to rush anything but she’s worked out her entire life and has always been healthy. “It feels good to start to feel myself again,” she wrote.

Celebrities being open about infertility

Kenya Moore’s IVF journey may have been relatively easy but it is certainly not easy for people to come out and talk about this subject. Although more people are owing up to their fertility problems and raising awareness about the subject, it is still not a topic that makes for easy discussions.

Adding to her husband’s point on the Tamron Hall show, Moore said that it is great that we’re now seeing more and more celebrities coming forward to share their “experiences with pregnancy loss and infertility, since it helps others in this situation realize how common it is.”

It is easy to assume that those celebrities with baby bumps had an “easy path to parenthood,” she said. “By opening up about their struggles, people in the public eye can help others feel less alone.”

Infertility Aide appreciates celebrities like Kenya Moore and Marc Daly, who open up about infertility and share their IVF stories to help other people suffering in silence.