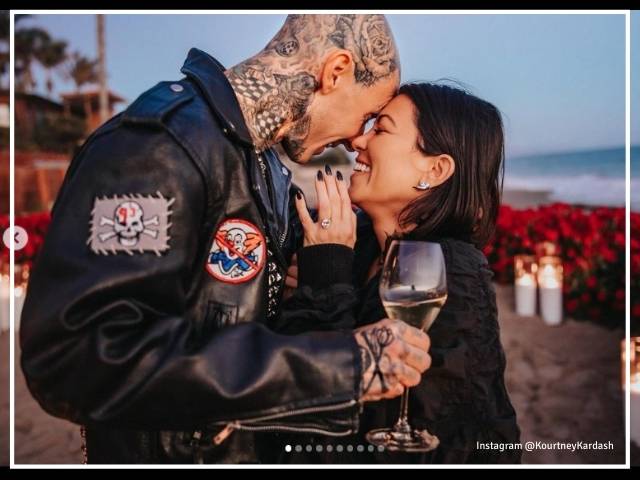 Kourtney Kardashian says IVF caused early menopause while she was trying to conceive a baby with fiancé Travis Barker. In a now-deleted clip from the Kardashians’ upcoming Hulu series, the eldest Kardashian sister claims that IVF medications have caused several problems for her including weight gain and menstrual changes.

“It hasn’t been the most amazing experience,” she tells her mother, Kris Jenner.

This seemed to confuse Kris, who asked, “Based off of what? A drug?” to which Kourtney replied, “Yes,” although there were no further details as to what specific medications she was using in her treatment.

Kardashian also complained that her IVF treatment caused weight gain, which led to constant speculation of her pregnancy and made her a subject of incessant online trolling.

Questions about pregnancy are difficult

As many other people have said before, the hardest thing when you’re trying to get pregnant is people questioning if you’re pregnant yet.

“I humbly beg you to stop asking if I’m pregnant because while I know it’s said with excited, good intentions, it just kind of sucks to hear because I am the opposite of pregnant!” Teigen said, adding “Also like please stop asking people, anyone, if they’re pregnant.”

Back in December someone commented “preg belly” on pictures Kourtney posted of herself in a pool with Travis. She snapped, “Are we really going to do this every time I post a photo?”

The clip did not seem to clarify if Kourtney is actually menopausal or she just experiencing the symptoms of menopause—hot flushes, chills, sweats, weight gain.

Menopause typically happens between the ages of 45 and 55 in women but there are exceptions to this rule.

Around one percent of all women experience premature menopause—it happens even before the age of 40 years.

Some women also experience early menopause—between 41 and 45 years of age. Every woman must know the most common signs of menopause as it is likely you will encounter them at some stage in your life.

It is not clear if Kardashian is undergoing a fresh cycle of IVF as she had frozen a batch of her eggs two years ago. It is possible she is actually experiencing menopause now and thinks it came early due to the ovarian stimulation drugs she took back then.

Can IVF drugs cause menopause?

Certain side-effects of IVF medications have long been known to the experts but is it possible that they may so significantly affect your menstrual cycle as to turn you menopausal?

It was also found that ovarian stimulation in IVF advances the age of menopause in women. However, the researchers noted that these differences were not clinically significant and further research is required to cement these findings.

Another study involving the same number of women, who were treated for infertility at Bourn Hall Clinic, Cambridge, between 1981 and 1994, found that there was no significant relationship between the number of ART cycles and the advancement of menopausal age.

Early ovarian ageing is a concerning trend among women these days. It is mostly determined genetically but acquired factors such as smoking and poor lifestyle may also contribute to the problem.

What do the experts say?

We asked for the opinion of experts on this subject to see if Kourtney’s self-analysis may be correct.

“IVF treatment doesn’t cause menopause. The reason for her getting IVF treatment is that she is infertile and the reason for her infertility is most likely poor ovarian reserve,” said Dr. Paul Tay Yee Siang, Senior Fertility Specialist, Consultant O&G at KL Fertility and one of our top fertility experts in Asia, adding that he doesn’t have the accurate medical background of Ms. Kardashian to make an affirmative statement.

It is possible that her AMH as well as the antral follicle count was low even before her IVF treatment started.

“Studies have shown that AMH is an extremely good predictor of menopause. Women with levels of AMH < 0.2ng/ml will on an average have their menopause in six years,” he said.

“Patients may experience some symptoms such as hot flushes while taking IVF medications, which may resemble menopause. However, these are temporary and will be gone after the cessation of medication.”

Dr. Alfonso Suástegui Navarro MD, Consultant Fertility Specialist at AFCC Cancun, says, “Menopause is defined as a woman’s last menstrual period, and it is usually caused because of a total ovarian shut down that is expected as a natural part of aging around 49-51years,” adding that “IVF doesn’t cause menopause.”

“Now, there are a lot of medication protocols we use for IVF, some of them prevent the ovaries from working and producing their own hormones because we need to synchronize the endometrium artificially for the embryo transfer,” explained Dr. Navarro.

This is why in some types of protocols, in order to avoid the risk of cancelling the whole cycle due to an ovarian spontaneous ovulation, we use the agonists, so we can PARTIALLY AND TEMPORARILLY shut down the ovarian function.”

Do IVF drugs cause weight-gain?

“Yes, IVF medication for ovarian stimulation can lead to weight-gain as they cause retention of fluid in the ovaries, abdomen, and sub-cutaneous tissue,” said Dr. Paul. “Again however, the symptoms are temporary and will be gone after the cessation of medication.”

Kourtney is a mother to three children—Mason, 12, Penelope, 9, and Reign, 7 —that she had naturally with former partner Scott Disick.

However, as she found new love in musician Travis Barker in her late 30s, she opted for egg freezing to be able to have children later with him.

At 39 years, Kardashian undertook ovarian stimulation and her doctor managed to retrieve and freeze seven eggs.

She’d even allowed the cameras to follow her on this journey and shared her struggles through the process.

“It’s like crazy. I feel like I want to jump out of my skin. I’m so crazy, I can’t take it,” Kardashian said. “I just feel like this is for safety. I hope that going through all of this is worth it. I don’t want to put my body through something like this again. The emotions of it all are just a lot.”

Eventually she said she was glad to have some peace of mind with the “insurance” of her fertility.

We need more research into the effects of IVF on menopause as the studies available until now are contradictory and unproven.

Menopause or no-menopause, Kourtney Kardashian is now looking better than ever and I hope she’s feeling so too. Best wishes for her to be able to achieve her family dreams with Travis.

Kourtney Kardashian says IVF caused early menopause but medical experts believe that may not be accurate. Does this raise a concern for you about IVF drugs?

Predicting menopause by Understanding the decline in ovarian follicles with age https://pubmed.ncbi.nlm.nih.gov/1291557/