In an oddly remarkable incident, Irish musician Sharon Corr was invited to play for a room full of developing embryos at a fertility clinic in Spain, as they believed that music improves chances of IVF success.

“I think music in itself is healing…It’s something we are all touched by,” said Billy Joel, and a Barcelona IVF clinic agrees.

In research presented at the Annual Meeting of ESHRE in 2013, the clinic reported how musical vibrations can be favorable for IVF outcomes. They claimed that subjecting embryos to different kinds of music during the fertilization process can boost their development and improve the chances of success by 5 percent.

Even the singer is amazed

The singer, who was astounded at this revelation, was also quite touched by this opportunity and called it an “emotional experience”.

“It’s great to think that we could possibly be a part of the future and we could make a change. It’s just beautiful to make music,” she said.

“I’m so amazed at the whole process and how it works and yet I’m not surprised that music really helps the embryos to form because music is the greatest therapy in the world.”

Sharon was also accompanied by Spanish musician, Alex Ubago, during her live performance at the Institut Marques clinic in Barcelona. It was live streamed to the incubators at their branches in Clane, Ireland, and Villa Salaria, Rome.

She was formerly The Voice of Ireland coach and is married to barrister Robert Gavin Bonnar. They have two children together—a 12-year-old son, Cathal, and a 10-year-old daughter, Flori.

Of late, she has been touring with The Corrs following the success of the band’s critically acclaimed album, Jupiter Calling, which was released in November 2017.

How does music help the embryos?

During the IVF process, the embryos are normally left in the controlled environment of an incubator for 3-5 days, but within Institut Marques fertility center, they are also exposed to musical microvibrations 24 hours a day. They use three musical styles—pop, heavy metal and classical. 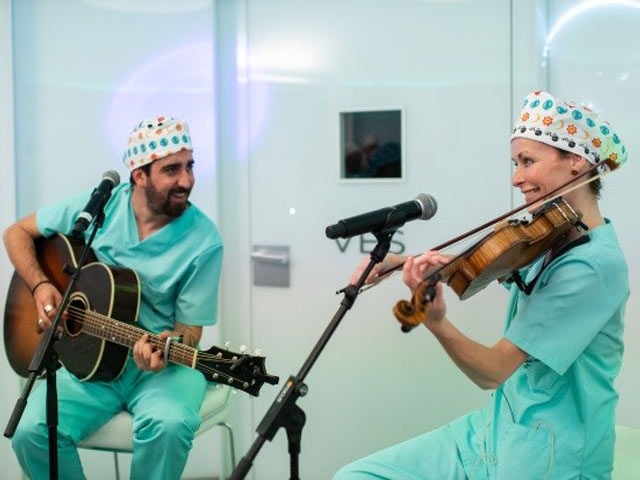 Apparently, the clinic started using this musical aid after internal studies first suggested that good vibrations can help to increase the chances of success of IVF.

While music helps a lot of people heal, how does it really help the embryos, who have no ears?

According to the institute, the culture in which the egg swims is stirred with the micro vibrations of the music thus causing an even distribution of the nutrients the embryo needs, and helping it grow better.

How do you feel about music helping embryos grow better? Please share in comments below: