Jimmy Fallon’s IVF and surrogacy journey is no secret as the television host and his wife have been quite open about their fertility problems. When they first brought their little daughter into this world, Jimmy and his wife, Nancy Juvonen Fallon, disclosed what a difficult ride it had been.

“It’s hard if you can’t have children,” Fallon said. “We struggled for a good five years trying to have a kid.”

Fallon revealed this piece of news two weeks after the birth of his daughter, Winnie Rose, who had arrived in this world with the help of IVF and surrogacy.

One and half years later, his second daughter, Frances Fallon, also arrived via surrogacy. 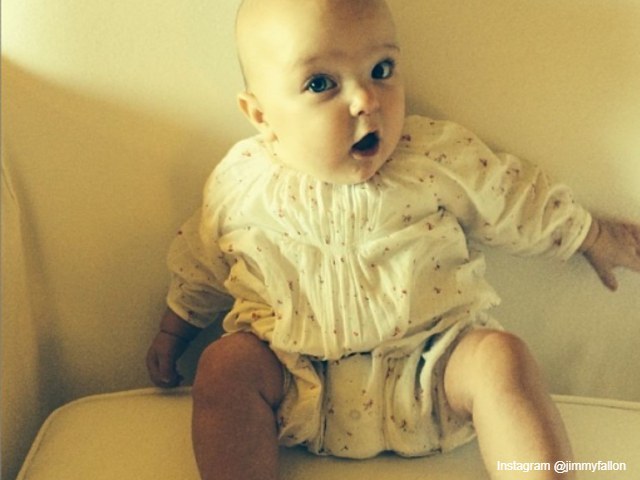 The actor-comedian talked about his struggle to conceive in an interview with Today magazine, where he announced the arrival of his daughter and the many difficulties he faced on the road to parenthood.

“We tried a bunch of things. Anyone who’s tried will know, it’s just awful,” he said. “So, we had a surrogate.”

Speaking out about infertility

Even though almost one in every six couples in the world faces infertility, it is a topic that remains under-discussed.

A survey conducted for Schering-Plough, a pharma company that later merged with Merck, found that 61percent of infertile couples kept their fertility problems hidden from family and friends, and half didn’t even discuss with their mothers.

The same survey concluded that seven out of 10 men and women considered themselves insufficient or flawed after being diagnosed with infertility.

However, with more celebrities are opening up about their fertility problems, the dialogue is gradually opening up.

For the Fallons, infertility was a long battle that went on for several years as the popular talk show host and his wife unsuccessfully tried IVF and other treatments multiple times, but failed to conceive.

Fortunately for Jimmy, the struggle ended with the arrival of his baby girls and he now advises couples who are going through the same, to not give up. 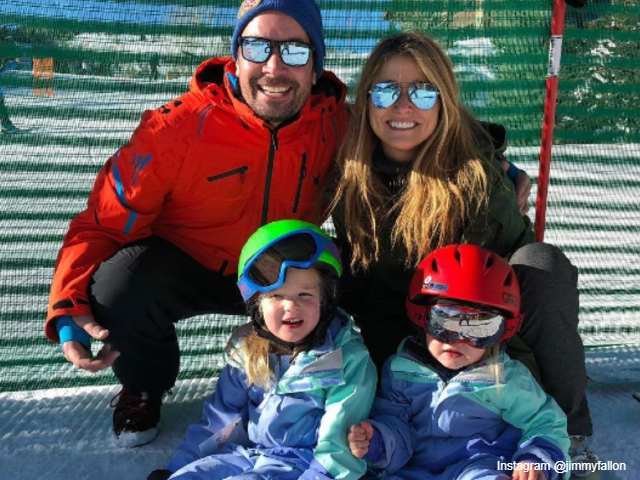 “I know people have tried much longer than we have, but if there’s anyone out there who is trying and they’re just losing hope, just hang in there,” he insisted. “Try every avenue; try anything you can do, because you’ll get there. You’ll end up with a family, and it’s so worth it. It is the most ‘worth it’ thing.”

For five years the comedian and his wife were unaware of the actual problem and had no idea which of the two partners was actually infertile. There can be various reasons for failure of IVF and sometimes it is difficult to determine a specific cause. They kept trying different treatments, which obviously became harder as time passed.

“It was a tough time and … it’s not easy,” he said of the time when they were trying to conceive. “We didn’t know, you know, which one of us wasn’t clicking.

“I slept upside down at one point—I was like dangling from the ceiling. You know, like you drink teas. And my wife, gosh, she just put up with a lot of stuff. Luckily, [we] got involved with a surrogate and so she had our babies. …she’s a blessing; it was the best thing that ever happened to us.”

Initially, even Fallon and his wife could not talk about it because the first few attempts failed, and it became an added pressure on everybody. “We tried before, we told people and then it didn’t happen, and it’s just really depressing. It’s really hard on everybody. I didn’t even tell my family,” he said.

So even when their surrogate conceived successfully, Jimmy and his wife did not disclose the news to anyone until after the baby was born.

“We said, ‘We’re not going to tell anybody. It’d be just more fun if it’s just private between me and my wife. And then we get to introduce her to everybody.’”

Finally, he got to introduce his baby to the world and Fallon did it in his unique way.

In his popular “Thank You Notes” segment on the Tonight Show, Fallon wrote a note to Prince George of Cambridge, who had just been born then. The note read: “Thank you, the Royal Baby, or as I call you: the other baby.” Delightedly, he then winked to the camera as a photo of his baby girl was flashed on the screen for the world to know his little bundle of joy has arrived.

Jimmy’s daughter, Winnie Rose, was not named after the popular comic character. “It’s not Winnie-the-Pooh at all . . . though I do love Winnie-the-Pooh,” he clarified. “My wife and I got engaged in New Hampshire at this lake house that her family’s had forever, and it’s on Lake Winnipesaukee. And so we went there every summer as we were dating.”

“And yeah, Winnie from The Wonder Years is the coolest girl in any TV show ever,” said Jimmy, mentioning about Winnie Cooper’s character. “And also, she’s a ‘win’ for us.”

Two years after the birth of Winnie, the Fallons welcomed their second baby, Frances, also with the help of a surrogate.

Jimmy had a new mission this time: he tried really hard to get her first word to be “dada.”

He was so fixated on this agenda that he even published a children’s book, ‘Your Baby’s First Word Will Be Dada.’ 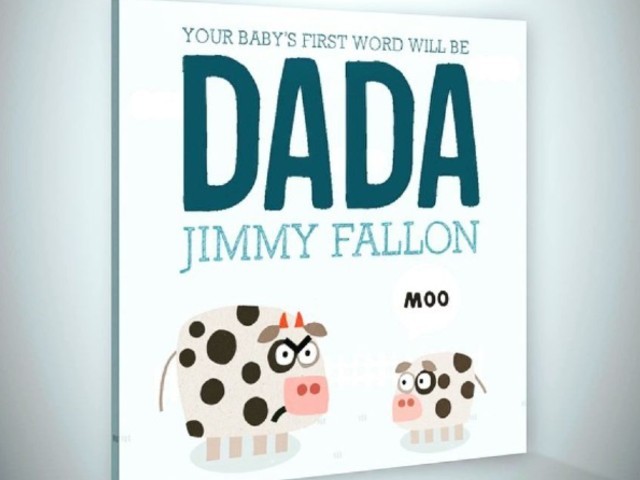 “The thing about this book is there’s no real point to it. … It’s a selfish thing.” He joked while launching the book, which is available on Amazon.

All about the babies

Fallon could hardly contain his excitement on the birth of his daughter; he admitted he was totally “freaking out.”

Reasonably, now he can’t get enough pictures of the girls. “I promised myself I wouldn’t be that guy when I had a baby, like, ‘Oh, you want to see a picture of my babies?’ My whole iPhone is just all baby pictures. It used to be, I guess, food? I don’t know what else you take with your iPhone — it’s brunch or babies. …” he told NPRs Morning Edition. 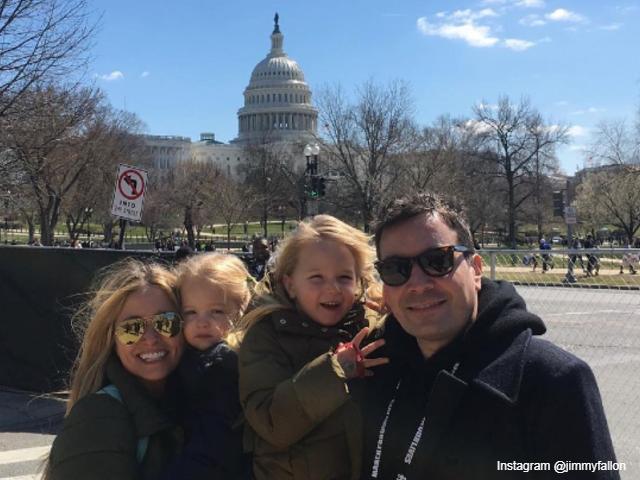 “I definitely really appreciate what I have. I mean I just love them so much and it’s insane. It was a long time, just kind of a weird time.”

Opening the talk on infertility

Jimmy Fallon’s IVF failures and the long journey towards parenthood caused much pain for the comedian, but he now asserts on the importance of having an open conversation about infertility.

“A lot of people don’t really talk about it that much, you know, and I think they should,” he said. “Should you freeze your eggs or whatever when you’re a woman? No one talks about it. I don’t think I should be the spokesperson for that stuff. You can talk to my wife about it. But she was like, ‘No one tells you.'”

Considering how there are many high-profile celebrities who have come forward to speak about their own fertility problems, the stigma surrounding this topic is slowly starting to fade but we’re still a long way from having real open conversations about infertility.

To a certain extent now, infertility is being seen under a new light as something that can be dealt with together by sharing stories and helping one another.

Like Fallon, other celebrities including Jessie J and Sarah Jessica Parker refrained from talking about their infertility while they were undergoing the treatment, but later talked about conception with medical aid.

The rarest instances are for political personalities to come up and talk freely. Which is why, when  Michelle Obama spoke about her infertility struggle and how she conceived her daughters via IVF, the media went into a frenzy.

It is believed that the public sometimes can be very harsh on celebrities and their personal problems are often downplayed with ‘they have the money’. While it is true that some people have it easy financially, but anyone facing infertility goes through similar emotions—anger, anxiety, resentment, despair—and the famous ones have battle it under the attention and scrutiny of the public.

Infertility Aide appreciates Jimmy Fallon and all the people who come out and speak about their fertility problems, and in turn, inspire others to do so.