The woman who found humor in infertility 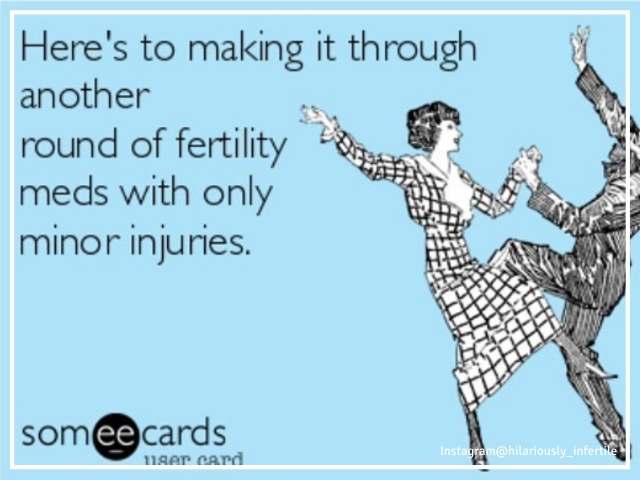 Infertility is difficult. But one New York woman has found humor in infertility and is sharing her funny memes for others find a breather in through the painful journey.

Karen (name changed to protect her personal identity as she says “My students Google me!”), is a 35-year-old teacher, who shares funny pictures on her instagram account Hilariously Infertile to lighten the mood.

By finding humor in the situation, she also helps make it a little easier to open up and talk about infertility, which is still a taboo topic.

Karen suffered from infertility due to PCOS. She and her husband, Jeff, found out about their conception problem in December 2011 and underwent months of IVF treatment—a process she describes as mentally taxing.

It was difficult as she recalls the time she almost felt hopeless: “I kept thinking maybe I won’t get pregnant, maybe I have to change everything I thought my life would be.”

But Jeff kept her going—poking fun and teasing her through the journey.

“He got me through it with laughter and humor. We made fun of IVF, because you have to joke about it or else you cry,” she said.

Fortunately they conceived the next year with clomid and insemination, and Karen gave birth to her first baby girl on November 8, 2012. Three years later, another IVF cycle was successful and they had another daughter in 2015.

The mother of two admits that it was uplifting to post those funny memes and video confessionals on her account as she was also supporting other women, letting them know they aren’t alone.

“I’m trying to give women hope and to get them to see the ridiculousness of infertility and infertility treatments,” the fourth grade told People magazine. “It can be funny, for instance, when you’re in the clinic and no one talks to each other and, like, aren’t we all infertile? Can’t we all talk to each other?

“I’ve had women tell me all they did was cry until they found my page and now they see that there’s humor in IVF treatments and infertility.”

But it was never easy. Just like every other infertile woman, she broke down, and kept trying to make sense of the situation.

“I had a complete breakdown,” she said. “I kept Googling my diagnosis and seeing the word ‘infertile’ and each time it hit me like a ton of bricks.”

However, once she started this humorous Instagram account, thousands of women connected quickly and the response she received was very encouraging. The account was started in April 2016, AFTER she became a mother to two girls, and has since garnered over 10,000 followers.

“It really took off right away,” she says. “I didn’t have social media when I was going through treatments, and I think it’s a great platform for women to connect over an awkward issue.”

“My main message is that women going through this aren’t alone,” says Karen. “Ultrasound wands are funny, let’s be honest.

“If you can’t laugh about this stuff, you’ll lose your mind.”